Slayer's Retirement Plan Is to Become a Lifestyle Brand

Slayer is one of those bands that even if you have never listened to a single second of heavy metal music, you still recognize the name. If you were to try to get into metal, chances are you'd go to Slayer first. With the band hanging it up on an iconic career after one last tour, it's no surprise that it's sold $10 million in merchandise so far on the road, and there's still another leg of the tour to go.

For what it's worth, the band has vehemently insisted that the boost in sales has nothing to do with the fact that Kendall Jenner was spotted wearing a tattered Slayer tee in public. They're so anti-Kardashian that guitarist Gary Holt wore a shirt that said "Kill the Kardashians" on stage shortly after. (Very metal.)

Where the story of Slayer and its eye-widening merchandise sales figures is so interesting is that you get to see the transition in real time from a working band to what its merchandising people are calling a "legacy" band.

Think about how you see people still wearing shirts for the Beatles, Jimi Hendrix, Nirvana and countless other bands or artists that haven't put out music in decades (or might not even be alive). With Slayer's retirement, the band's management is shifting its merchandising into that "legacy" mode. Basically, this means that once they stop being an active band, they become an active brand (which gives the Kardashians plenty of opportunities to rep it). 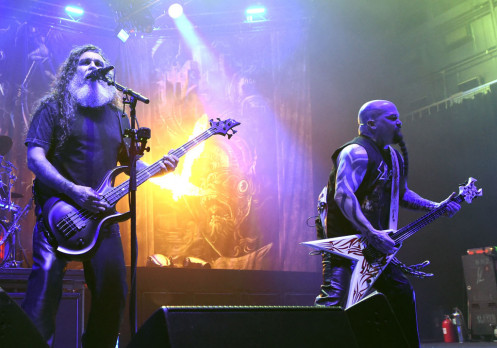 Slayer has already sold $10 million in merchandise on the first leg of its farewell tour, and is setting itself up for a comfortable retirement. | Credit: Getty Images by Ethan Miller

"We're in legacy mode," Kristen Mulderig of Rick Sales Entertainment Group told Pollstar. "Which is a lot to do, even though they won't be making records or on the road. They still have their endorsers, there's still merch and branding to do—sync licenses and who knows? Maybe coming up with some sort of event that is Slayer-based. This is all stuff we're thinking about and talking about. Slayer lives on, absolutely."

Consciously going from a band that needs to sell T-shirts to pay the mortgage to lifestyle brand that once represented one of the most frightening musical groups on the planet is pretty wacky. There's not really another way to look at it. It's even more wacky when you look at the band getting all up in arms about a celebrity like Jenner wearing their shirt while they're simultaneously discussing a Slayer-branded event.

It's perfectly within Slayer's right to make money. There's no shame in shrewd business planning and marketing. Everyone has the right to retire comfortably. And they've done the work to build a fanbase so strong that it's still committed four decades later and into the end of their career.

The band's management is also wisely taking anti-counterfeit precautions. Think again about those bands we mentioned before. How many rip-off tees have you seen on the boardwalk, at some festival or in a weird coffee shop? Probably a ton. And you can bet your bottom dollar that nary a dime of that is going to their estates. Slayer wants to make sure the brand is strong, but that it all benefits the band.

Also important is ensuring that no one profits from the band’s intellectual property but the group itself. Stephen Connolly of the anti-counterfeiting company Pointer Brand Protection said that the marketplace is full of T-shirts and other merchandise that illegally use the trademarks of such bands like Led Zeppelin and the Ramones. Slayer, he said, will have to make sure that the counterfeiters aren’t profiting off of them as well.

David Hooper, the host of the Music Business Radio show and owner of the Big Podcast Agency, said that Slayer could also make their future more secure by getting into the restaurant and lifestyle merchandise business. After all, it worked well for Jimmy Buffett’s Margaritaville hospitality company, which manages a restaurant chain, hotels and casinos.

A Slayer-themed restaurant that even barely resembles Margaritaville is something I never knew I wanted, but I am desperate for it to materialize now.

"That's how these guys keep making money," Hooper said. "The logo and imagery are worth something."

You got that right. And it's fascinating to watch this transition as a larger-than-life band uses that worldwide popularity as a retirement plan-ex-merchandising campaign.

Whether people know what they're advertising is up in the air, though.

"A few years a go, I was talking to a lady in a RUN-DMC shirt," Hooper said. "I mentioned to her that I had worked doing promotion for them. She told me she had no idea of the music they did."

So, the moral of this story is that you'll have plenty of opportunities for the Slayer logo to be a part of your life. Just maybe do them a favor and listen to "Raining Blood" at least once beforehand. (That intro riff will always rip.)