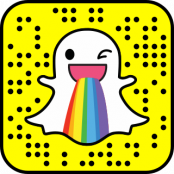 Snapchat, one of the most popular and innovative social media platforms in the world, has just launched an in-app store for branded merchandise. That’s right, Snapchat’s 150 million estimated daily users will now be able to purchase various branded items within the same, user-friendly app that allows for the seamless dispersal of disappearing photos and videos with the tap of a finger.

A fully integrated, easy-to-use store is one thing. What’s important is that Snapchat has some decent merchandise to offer. From what we can tell so far, the products offered look a lot like other branded offerings that have recently been released by the likes of KFC, Arby’s and Taco Bell. Geared toward millenials, and unabashedly quirky, Snapchat’s new line of branded merchandise could bring some serious cash.

New merch! Scan the Snapcode on our new site to check it out 🙂 https://t.co/iKMhHQLsBd

So far, the store contains products that pay homage to a few recognizable Snapchat characters and features. The offering includes a plush figurine of the dancing hot dog with posable arms and a removable bun for $19.99, a fire emoji Snap streak hat for $29.99, a Winkface sweatshirt for $49.99, a dog filter tee for $29.99 and a “Bring back best friends” sweatshirt for $49.99.

Don’t recognize any of these references? Well, that’s because Snapchat’s target demographic is mostly made up of teenagers and college-aged millenials. While none of the products may seem too attractive to anyone outside of this demographic, especially to those of us who don’t use Snapchat, the social media behemoth is betting that the youth will flock to its new store’s zany selection of items. They’ve even provided a convenient teaser that states that its users should act fast if they want to get their hands on the merchandise, as it will disappear without warning, presumably once they are sold out or when a new line of items will be posted to replace them.

Snapchat’s incredibly maligned Spectacles are notably absent from the online store. The Spectacles, which were launched to a ton of hype back in 2016, are the company’s only hardware product. They were designed to allow users to take photos and videos without having to hold their phones, and they were hailed as an innovative means of creating a more seamless interface for experiencing the world through social media.

Unfortunately, the public wasn’t too keen on the Spectacles, and Snap Inc., Snapchat’s parent company, is rumored to have lost close to $40 million through the venture. That means that they are currently sitting on hundreds of thousands of unsold Spectacles. Ouch.

While the new in-app store is said to be separate from that venture, it would be interesting to see Snapchat try to sell some of the leftover Spectacles on the app. Despite their lack of popularity, they did gather some decent reviews, so it could be an opportunity to make the best out of a promotion that seemed to be dead in the water.

While Snapchat positions itself to be a formidable player in the game of promotional merchandise, it’s important to remember that its platform has been a popular attraction for other international brands looking to advertise via its unique interface and through the use of augmented reality technologies. Both Warner Bros. and Bud Light announced in October that they would be teaming up with Snapchat in order to create advertisements for the social media platform.

As Snap Inc. works to revive its struggling IPO, the share price of which has declined significantly since it launched last March, it seems to be hoping that this merchandise store will be, if not a jumpstart, then at least a step in the right direction. Time will tell if plush anthropomorphic hotdogs and emoji hats will manage to do the trick.