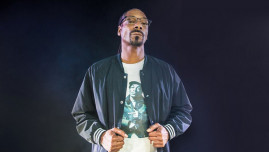 Famous rapper and music producer Snoop Dogg has been branching out with his talents. Recently, he collaborated with Martha Stewart on the most amazing cooking show ever, and now he is creating an awesome clothing collection, according to The Hollywood Reporter.

The clothing line is launching in partnership with Los Angeles-based streetwear brand JOYRICH to celebrate the company's 10-year anniversary. The capsule collection will feature 33 pieces, including lifestyle products like pet accessories and bathrobes.

The collection aims to draw inspiration from Snoop Dogg's early career, as well as his laid-back California vibe. Snoop Dogg also brought his son, Cordell Broadus, on board as creative director.

The collection will debut at the Made LA 2017 two-day music and fashion event in Los Angeles on June 9 and 10.