It sounds like a parody of an alarmist cable news report:

Are your children snorting caffeinated chocolate powder for fun? Find out at 6.

Well, this isn't cable news. And you don't have to wait until 6. Children are snorting caffeinated chocolate powder for fun.

The product, Coco Loko, is made from cacao powder and caffeine. The retailer, Legal Lean Co. (which sounds totally reputable), doesn't detail any other ingredients online, but includes common energy drink ingredients, according to CBS News.

As a result of its possible health hazards, U.S. Sen. Chuck Schumer is asking federal regulators to look into the product.

"This suspect product has no clear health value," Schumer said in a statement. "I can't think of a single parent who thinks it is a good idea for their children to be snorting over-the-counter stimulants up their noses."

After a quick search for the product, we found that its Amazon product description simply reads:

The fact that the company selling it is called Legal Lean Co. presents a number of red flags, as well. For the uninitiated, "lean" is a slang term for a drink that consists mostly of codeine, along with some Sprite and maybe a Jolly Rancher candy for flavor. 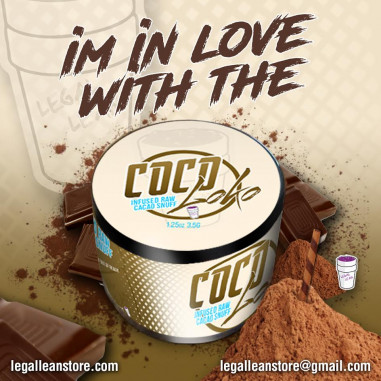 Raw cacao will give you a sense of calm focus and reduce the chatter and worry in your brain, so you are able to accomplish many tasks at once and maximize your time and focus. It is also known to help with anxiety and to reduce stress.

Doctors aren't entirely sure what the health problems associated with the product might be, but they are fairly confident that they exist, nonetheless.

"The question is, what are the risks of doing it?" Dr. Andrew Lane, director of the Johns Hopkins Sinus Center, told The Washington Post. "There's no data, and as far as I can tell, no one's studied what happens if you inhale chocolate into your nose. When I mention it to people, nobody's ever heard of it."

The threat of harm depends on the amount of each ingredient is absorbed into the nasal mucus membranes, along with the possibility of the chocolate mixing with mucus to block the nasal cavity and sinuses.

After products like 4Loko, the alcoholic soda-like beverage that also contained caffeine, were forced to change their recipes due to the harm associated with caffeine mixed with alcohol, it would be shocking to see a product like Coco Loko receive a thumbs-up from the FDA.

For promotional products distributors who sell food products as well as energy drinks or wellness products, it's always best to know every possible threat associated with an ingestible product, and to always make sure the products are FDA approved before pitching them to clients.