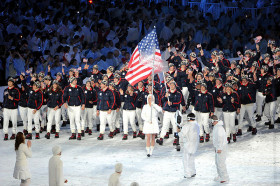 In case you weren’t aware, the 2018 Winter Olympics are well underway in Pyeongchang, South Korea. Amateur athletes from around the world are giving their all in competitions such as figure skating, curling, ice hockey and skeleton. So far, however, snowboarding has been stealing the show both on the slopes and in merchandise sales. Thanks, I thought that was a pretty good segue myself.

Anyway, two American snowboarders in particular have been making headlines for their dominant, gold medal-winning performances on the halfpipe. Traditional media outlets have been posting article after article about the two athletes, and Twitter has been on fire with posts about the two. While people have been paying attention to their performances, it’s also clear that the public is very interested in what they wore for the Olympics.

According to Reuters, Fanatics has reported that sales of a $300 Nike Inc. Team USA jacket have skyrocketed since the United States’ Chloe Kim and Shaun White won gold medals earlier this week. That makes the jackets its highest grossing Olympics category so far. Fanatics, which oversees merchandise for the United States Olympic Committee, says that it had already sold thousands of Team USA jackets before the two first place performances. After the success of Kim and White, however, the jackets started to sell like crazy.

The Nike jackets in question were worn by athletes in the press conferences following the competitions. For the halfpipe event, Kim and White both wore spacesuit-inspired snowboarding jackets made by Burton. Its unbranded version of the jacket, which costs $800, has reportedly sold out in the company’s online store for both men’s and women’s styles.

Jack Boyle, co-president of Fanatics direct-to-consumer business, talked to Reuters about the effect the athletes’ success had on Olympics-branded merchandise sales. “As soon as White’s performance happened on the half pipe, we saw the immediate demand come in for snowboarding," he reported.

As it would seem, this happens to be quite an understatement. Fanatics has seen an 80 percent boost in Olympic gear sales as compared to the last winter Games, which took place in Sochi back in 2014. In addition to the popularity of snowboarding amongst fans, Fanatics credits its success to a bigger selection of official, USOC-approved items, which range from a cowbell on sale for $45.99 to a Swatch watch that sells for $119.99.

Fanatics has also been seeing a lot of success selling hockey and curling gear such as jerseys and shirts. The sports merchandise giant, which also services the NBA and NFL, and has just signed a contract with Formula One, is fortunate to be doing so well on an international stage with the visibility of the Olympics. Despite its overwhelming success in the U.S., it hasn’t made too much of a mark elsewhere in the world. Armed with a $1 billion investment from SoftBank Corp., however, Fanatics is beginning to take its business overseas. Its success in selling merchandise for the Olympics will show foreign brands and investors that Fanatics is capable of bolstering sales for a wide range of sports and competitive stages. If the popularity of these snowboarding jackets is any indication, Fanatics should have no problem doing just that.