When we here at Promo Marketing reflect on 2008, our minds turn to sports, as that year yielded the second World Series title for our beloved Philadelphia Phillies. Our jubilation aside, the calendar was largely unkind when one elects to focus on the biggest economic events from a decade ago. The bankruptcy filing by Lehman Brothers registers as, arguably, the most notable and notorious finance-related occasion, and it has gone on to merit considerable analysis as a contributing factor to the Great Recession. The anniversary of the demise has inspired a combination of nostalgia and, dare we say, morbid interest for one man, who is peddling Lehman Brothers’ promotional products on eBay.

As the largest bankruptcy filing in U.S. history, the liquidation reduced to nothing an investment bank that had a value of $691 billion upon the negative news’ unveiling. While many people might feel compelled to confine the matter to history books and online commerce-concerned obituaries, an eBay user identifying himself as Ric Cam has decided, as the most prolific of Lehman Brothers’ goods sellers, to see what level of curiosity people have for company-specific tokens. 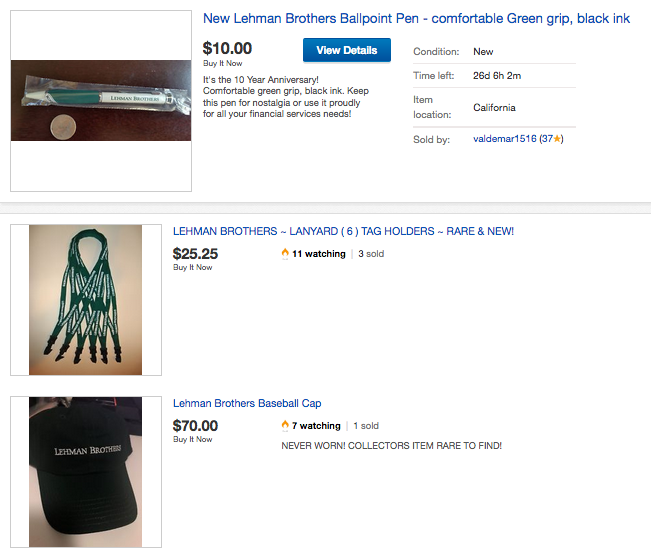 These are some of the Lehman Brothers-centric items that sellers are marketing on eBay. | Credit: eBay

When major entities fold, two reactions tend to prevail in discussions of the falls: Some people will wonder if their business is next, while others will cheer for the downfall as backlash for any presumed greed that the corporations exhibited. With respect to Lehman Brothers, both lines of thought occurred, and Cam’s motivation offers an interesting look at consumer psychology thanks to its source’s reputation. At the time of the September 2008 news that sent shockwaves through the banking world, Lehman Brothers had been the nation’s fourth-largest investment bank. Because of that status, the firm obviously took immense steps, pre-dissolution, of course, to market itself, especially via its employees. Said workers ended up reaping the benefits of a steady supply of promotional products, and Cam wants to make contemporary buyers look to the past through his offerings.

“Everything I sell is authentic Lehman Brothers memorabilia,” he said, according to an account by The Guardian. “I own the last of it.”

The user is not the lone eBay seller hoping to profit off any sort of enthusiasm for what Lehman Brothers accomplished, but he is the most ambitious, according to the aforementioned source, because he hawks most of the goods that pertain to the doomed bigwig. He and his peers have been gauging interest in such items as baseball caps, bibs, a coffee mug, paperweights and sticky notes, with the last of that quartet going for $500. For end-users who would want to inspect something that charted the demise, which we see as the business equivalent of looking at a horror film script, there are also annual reports from 2003 to 2005. No matter one’s penchant, it seems eBay is the destination, or at least Cam and his contemporaries hope so, to relive, to some degree, what the Lehman Brothers’ workforce experienced before all went south.

How does such an opportunity to own promotional parts of Lehman Brothers’ legacy strike you? Is it a unique chance to capitalize on all-things nostalgia, or is it an odd way to look back at the collapse of a company whose departure initiated a truly stressful time in our nation’s economic history? Maybe it's something beyond those two options.