For almost 67 years, Sonic has gained renown for its drive-in fast food restaurant chain offerings, and has benefited from an appealing logo to gain even more brand distinction. Times being what they are, though, businesses are looking to keep evolving, and Sonic recently added its name to the list of brands that freshened up their image. Earlier this year, the Oklahoma City-headquartered company chose a new logo, and complemented it by releasing a merch box fans could buy online. It proved to be a massive hit.

We can’t recall the last time that we crushed some Sonic food (note to self: end hiatus soon), but we know there are plenty of other consumers out there who cave to their cravings regularly. They likely helped the box to sell out in 57 minutes, with the coveted goodie set to ship on March 30.

Sonic wouldn't reveal the full contents of the box, but we were fortunate to learn that it contains a T-shirt that sports the new logo, which also features on the box itself. Judging by the size of the package, we are having a tough time guessing how many items it holds, but we hope that the T-shirt has considerable company and that whatever is in there helps end-users develop a relentless case of spring fever that culminates in their showing off the branded merch. 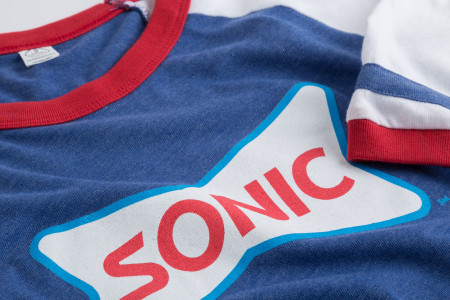 The Sonic T-shirt is the lone item that we know of that will soon ship to fans of the drive-in fast food restaurant chain. | Credit: Burson Cohn & Wolfe

With respect to the time it took the box to sell out, the Sonic brainchild reminds us of the success that subscription boxes have had, with Oreo, Arby’s and Coca-Cola resonating as businesses who have bundled goods to draw more attention to their brands. Sonic billed its box as a “limited-release, seasonal swag box,” so it certainly sounds like part of a more comprehensive campaign that rewards fans each month or quarter. We would like to think that could be since Sonic, especially through the addition of the Reese’s Overload Waffle Cone, appears ready to make its rebrand a far-reaching modification.

Aside from the T-shirt that we know about, the contents of the Sonic branded merch box will be a surprise to those whose shipments will soon arrive. | Credit: Burson Cohn & Wolfe

KFC Is Giving Away Finger Sporks So Your Side Dishes Can Be 'Finger Lickin' Good,' Too