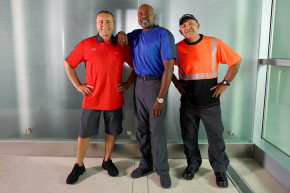 With American Airlines' new uniforms under constant barrage for causing rashes and headaches, Southwest Airlines is hoping for a smoother launch of its new uniforms.

According to NBC 5 Dallas-Fort Worth, Southwest is set to roll out its latest uniform looks. Outfits in Bold Blue, Warm Red and Summit Silver will replace the old khaki and navy uniforms. Come June 18, more than 42,000 flight attendants, gate agents and ramp workers will start wearing the first redesigned uniforms in two decades.

"1996 is when we introduced the khaki and navy look, and [it was] very casual," said Sony Lacore, vice president of Inflight Operations. "So two decades later, it was time for us to update to a bolder look."

"It's about time, and we are really excited that the employees were the ones that were able to design the new uniforms," said Tracye Tipps, one of 43 employees chosen to be part of the employee design team, which started working on the new uniforms in 2014. ""We did a lot of wear-testing to make sure that they were comfortable, that they were functionable, and we did it throughout the entire workgroup."

What do you think of Southwest's uniform refresh?