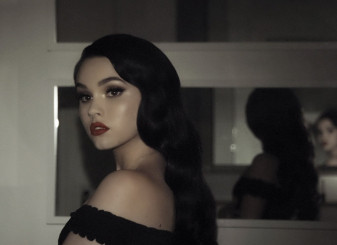 On Friday, Spotify, in conjunction with a new cosmetics line, will release "Obsessed" by 19-year-old Maggie Lindemann. (Image via popsugar.com)

Reinventing or modifying yourself requires intense analysis of your present state. In a commercial sense, such introspection requires an awareness of trends and a willingness to adapt so as to achieve longevity or preserve already impressive track records. As the most widely used music streaming service, Spotify, with more than 140 million paid and ad-subsidized devotees, has decided to put on a new face, so to speak, by blending the talents of makeup artist Pat McGrath and singer Maggie Lindemann, allowing the budding vocalist’s fans to mimic her look through cosmetic purchases.

The partnership not only unites the personal care expert renowned for her eponymous Labs business with the 19-year-old performer who is looking to duplicate in America the success she has already enjoyed in Europe but also helps the service become a bigger ally in the promotional products realm. Three years ago, Spotify offered musicians the chance to peddle merchandise through its site, taking no money from the legions of artists whom the aforementioned millions turn to for aural bliss.

For music lovers who want a more layered listening experience, McGrath and Lindemann have teamed up to present them with eight products, which they can access and purchase by visiting the latter’s Spotify page and scrolling down to an activation link from Merchbar. The San Francisco-based entity, whose employees dub themselves “technical experts, fans, hustlers, perfectionists, music-lovers and friends,” last year started to help artists sell goods through their Spotify profiles, joining BandPage as a boon to performers who are looking to add a few bucks to their bank accounts via merchandise lines. As with that form of assistance, the beauty items’ availability will not financially benefit Spotify at all, as the streaming service, in an almost too-good-to-be-true setup, is striving to draw acts to its platform instead of looking to bolster its financials by seeking a share.

Beauty is always in the eye of the beholder, and, in this case, the union between McGrath and Lindemann appears fairly fetching. Each lady is a social media heavyweight, and that detail will likely make fans quite compelled to have a fine time making up their minds when perusing the lipsticks, palettes and pencils that comprise the collection. To give the duo’s deal an even brighter complexion, Lindemann will release a new song called “Obsessed” on Friday, giving her supporters the opportunity to reflect the tune’s title by buying that which could allow their appearance to resemble hers.

Long gone are the days when one’s catalogue alone could help a person become a star in the music industry. What someone looks like has come, in many instances, to matter as much, if not more than, as what that person sounds like. If an artist is not doing heavy lifting in the promotional sense, too, regardless of actual talent, the next eager singer or band will more than make up for that slack by putting his/her/its best face forward. With respect to Lindemann, whose 2016 European hit, “Pretty Girl,” rails against perceptions of her as only an attractive figure, this deal could prove a promotional stroke of genius as she merges external blessings and internal gifts.

2020 Wrap-Up: Our Favorite Feel-Good Stories of the Year