Music streaming service Spotify announced its plans to dive further into the merchandise arena. After its Mint playlist of mostly electronica-dance music surpassed 5 million followers, Spotify decided to celebrate by creating a playlist-inspired line of merch.

Because the playlist is so popular, Spotify wanted to give back to the dance music community by partnering with nonprofit To Write Love On Her Arms (TWLOHA) to create this merchandise that promotes mental health.

"All the proceeds from the merch will go toward TWLOHA," said Austin Kramer, Spotify's global head of dance and electronic music, according to Billboard. "With so much renewed attention about mental health in the music community, we wanted to collaborate with a nonprofit that is dedicated to presenting hope and finding help for people struggling with depression, addiction, self-injury and suicide. TWLOHA exists to encourage, inform, inspire, and also to invest directly into treatment and recovery. They've been fighting stigma and bringing resources to creators since 2006. 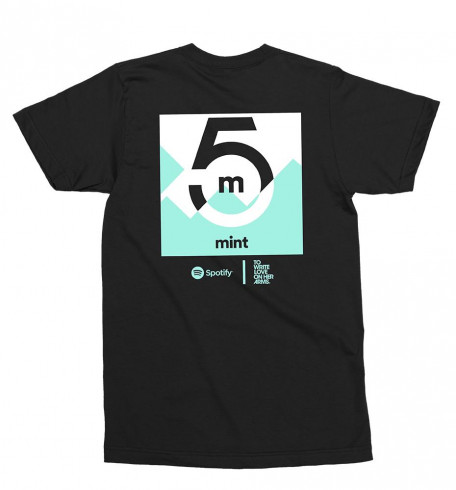 Credit: To Write Love On Her Arms store

"One of Spotify's missions—and specifically Spotify Fans First's missions—is to connect artists to their fans," he added. "That connection is powerful and impacts the community immediately by allowing fans to support their favorite artists and empowering artists to share gratitude directly to their fans. We chose to run this offer through Fans First as a way of thanking the fans who make this playlist a community."

The collection features a T-shirt, a tank top, a jacket and a fanny pack. Prices range from $22 to $45.

The items are currently up for preorder, with orders set to ship in two weeks.

It's always interesting to see what big brands do with their big data. Spotify could have easily taken these streaming numbers and created a collection that was entirely for profit. Instead, the company saw an opportunity to support a nonprofit and give back to the community that is behind the playlist's popularity. It's always a great idea to think outside the box for promotional apparel. And it's an even better idea to give back.