Josh Appelbaum isn’t new to the apparel space. He’s spent his whole promo  career in it. In December 2011, he broke into the industry as a territory rep for alphabroder (then Alpha Shirt Co.). Then, in 2016, he moved on to run the sales department for a large contract decorator before taking a national account manager role at Cutter & Buck, where he stayed until late 2018. That’s when he got the call from Hit Promotional Products.

Hit, relatively speaking, is new to apparel. A giant in the hard-goods space, the Largo, Florida-based supplier topped $397 million in 2017 revenue (enough to rank No. 4 on our 2018 Top Suppliers list), but began offering apparel only three years ago. As it looked to scale its soft-goods business, it knew it needed a pro. So, in October 2018, it brought in Appelbaum as vice president of apparel.

It’s easy to see why. Aside from extensive experience in multiple areas of the apparel business at some of the industry’s top soft-goods suppliers, he brings an unmatched enthusiasm to his role. “If we’re not scaling this thing upward every single day, we’re doing something wrong,” he says. “Stay tuned!” He uses exclamation points liberally. He concludes our short interview with what may as well be his mantra: “Scale, scale, scale!”

That’s the kind of energy and singular focus Appelbaum will need for the task at hand. Even for a supplier of Hit’s size, building out an entire new product category—especially one as large and diverse as apparel—is no small task. There’s more to it than just adding some T-shirts and hoodies to your website and watching the orders rush in. 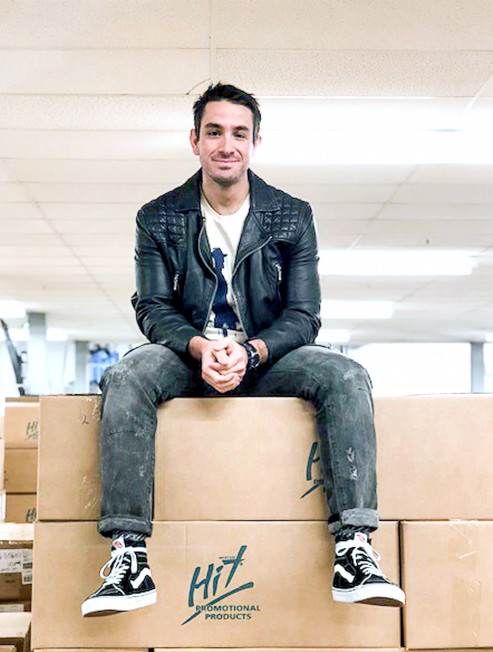 “Our biggest challenge is managing expectations within both spaces,” says Appelbaum. “The apparel sell is much more in-depth than the hard-goods sell, for the most part. We’re asking our reps to know sizing, styles, decoration methods, trends and seasonality of all things apparel-related. I wouldn’t label it a challenge, though, really. I’d simply say we’re a growing division within a growing company, and we’re fortunate enough to be nimble both in company resources and rep involvement.”

Appelbaum says Hit has been aggressive in its implementation of more efficient production practices and sales training for its reps. And it’s leaned on partnerships with top wholesalers to expand its apparel offering from a small selection of mostly basics to, now, 679 different styles, according to Hit’s website.

“We moved into the space on a limited basis at first, bundling and kitting basic T-shirts with our core assortment,” says Appelbaum. “When the opportunity arose to purchase a facility in centrally-located Ohio, we jumped. Since this isn’t really a ‘new’ concept, we really just jumped in and hopped to it! With everything, there have been growing pains, but we’re put together a solid and scalable process that we’re taking to market with ferocity these days.”

The move makes perfect business sense. Apparel is the top-selling promotional product category by far, and, beyond that, suppliers are increasingly moving toward a one-stop-shop type approach as a means to make the buying process easier for distributors and end-buyers. That’s the way the industry is headed, and Hit knows  it. Appelbaum uses words like “streamlined,” “affordable” and “efficient” to describe the process. “We’re really selling a service, a single invoice and a convenience,” he says. “We’re providing our world-class service in the industry’s stickiest category.”

There’s no guarantee it will work, but it’s already well on its way. And, if you ask us, Hit and Appelbaum are taking the right approach: Make it all about the client, and do whatever it takes. That’s a good lesson for anyone in the promo business. “We’re here to serve our amazing customers,” Appelbaum says. “We’re not here to offer them a limited choice of goods. If they want it, we’re going to try and provide it for them.”