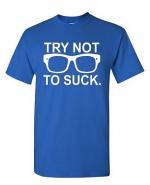 The St. Louis Cardinals now will allow the Cubs' "Try not to suck" T-shirt in Busch Stadium. (Image via Twitter)

As we reported in April, the St. Louis Cardinals were debating whether or not they would allow Chicago Cubs fans to wear "Try not to suck" shirts in Busch Stadium. After consideration, the team officially decided that it would revise the stadium rules to permit Cubs fans to wear the shirts into the ballpark.

Previously, stadium officials told Cubs fans that they had to either change into a different shirt or turn the T-shirt inside out, as the stadium had a rule against T-shirts with profanity, including the word "suck."

However, due to the T-shirt's charitable nature—proceeds from the shirt go to Cubs manager Joe Maddon's Respect 90 foundation—St. Louis officials made an exception.

"Our event staff will exercise a degree of discretion in interpreting the context of the use of the word," said Cardinals spokesman Ron Watermon to the Chicago Tribune. "The shirts that Joe Maddon had made to benefit charity that say 'Try not to suck' will be allowed under the approach."

Thanks to the controversy and publicity surrounding the T-shirt and Busch Stadium's stance, T-shirt sales reached more than $50,000 within days of when the Cardinals originally barred the T-shirt from the stadium.

Fans, such as Pedro Perez, who wore the shirt to a recent Cubs-Cardinals game, told the Chicago Tribune that the T-shirts are just a way to show team spirit.

"It's the logo for the year," Perez said to the Chicago Tribune. "The only people who can beat the Cubs is themselves."

With this rule change and the vague nature of using a "degree of discretion" in the stadium, it will be interesting to see what other shirts the Cardinals will allow or forbid fans to wear in the stadium.