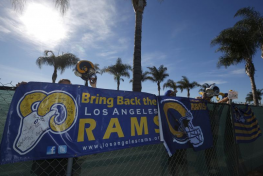 The St. Louis Rams officially are set to become the Los Angeles Rams once again, and fans in St. Louis are upset to say the least. So upset that four St. Louis fans are suing the team over its move, with the suit centering around the purchase of tickets and Rams merchandise.

According to the St. Louis Post-Dispatch, the four fans' lawyer hopes to turn the case into a class-action lawsuit that represents tens of thousands of Rams fans who bought game tickets or merchandise within the last five years.

The suit alleges that the team violated Missouri's Merchandising Practices Act by omitting "material fact" in connection with the sale of merchandise. What this means is that, after Rams owner Stan Kroenke took over the team in 2010, fans who purchased merchandise and tickets did so believing that the Rams would stay in St. Louis. The Rams' relocation plans were the basis for the deception claims.

The Rams originally moved from Los Angeles to St. Louis in 1995. After taking control of the team in 2010, Kroenke said that it was not in the team's interest to leave St. Louis.

Steven J. Stolze, the fans' attorney, said that the suit seeks a refund of money fans spent on the Rams since 2010.

According to the report, the lawsuit indicates that the team never informed their customers of the plans to move until Jan. 4, 2016, when the team filed the application to relocate to Inglewood, Calif.

More fans reportedly have started reaching out to Stolze to ensure they receive a refund.

Do you think the St. Louis fans have a case here? Let us know in the comment section below.