Stanford Says No, Then Yes to American Flag Decoration on College Republicans Apparel 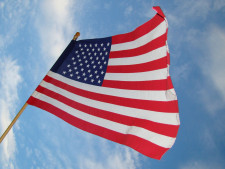 Stanford University has reversed its decision to ban the American flag on College Republicans' apparel.

The initial decision came last week when the university decided not to allow the Stanford College Republicans proposed apparel, which featured a logo that contained a portion of the American flag. According to Stanford, the decision came as a result of trademark violations.

“Stanford does not approve the use of the American (or other flag on product also featuring our trademarks (including the Stanford name) [sic],” states an email from Kara Hegwood, a trademark licensing associate at Stanford University, to the group, obtained by The College Fix. “We can approve red/white/blue themed product but cannot approve this design, which features [an] altered version of the flag in the background of the design, and within the initials for the organization name. I note you feature a different design on your website—we would be able to approve that design on product."

The Stanford College Republican financial officer, John Rice-Cameron, was not satisfied with the decision.

“The logo is emblematic of our club,” he said. “It shows we are willing to boldly promote conservatism.”

And it looks like his campaigning paid off. As of this week, the initial decision has been reversed, according to Fox News.

“Stanford College Republicans is welcome to use the images of the U.S. flag reflected in the current design of its logos,” university spokeswoman Lisa Lapin told Fox News. “We now recognize that the specific policy was framed in an overly restrictive manner.”