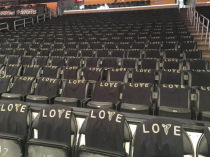 Last week, we looked at at some of the merchandise commemorating Kobe Bryant's last game in the NBA, including a hat worth $38,024. That seems like a lot for a hat, but, as the team saw, fans are nuts about Bryant. During his last game, Los Angeles Lakers fans spent a total of $1.2 million at the Staples Center—setting a single-day sales record for any arena in the world, according to ESPN. (Fun fact: Led Zeppelin previously held the record, with $1 million in merchandise at the O2 Arena in London.)

The average fan spent $61 at the game on merchandise alone, with the average bill reaching $230.

"It says that fans are really appreciative of this moment and wanted to maybe have something they can remember," Bryant told ESPN.

Sean Ryan, vice president of merchandise for AEG, told ESPN that all pins, coins and jerseys were sold out at the end of the night. One customer even purchased 20 limited-edition snakeskin jerseys—which retailed at $824 each. (Quick math: That's $16,480.)

In addition to the items for sale, each fan at the game received giveaway items—some more high-end than others, depending on the seat.

The Washington Post reported that every fan received a T-shirt with "Love" on the front and "MambaDay" on the back, incorporating Bryant's personal logo. Also, they each got a commemorative book, which included a hologram of a young Bryant and present-day Bryant.

Fans in courtside seats (like Jack Nicholson) received a bag that included six T-shirts, a hat and a remote-controlled helicopter.

Additionally, 20 people sitting courtside got a pair of Bryant's signature Nike shoes with the date of his last game on the heel.

The onus now falls on Led Zeppelin to get back together again to break Bryant's record. We definitely could see diamond-encrusted "Zoso" T-shirts selling big.