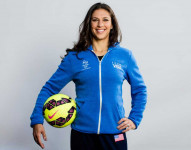 It seems that every commercial is tied in to the upcoming Olympics. Co-branding is rampant from brands, like Coca-Cola and Visa. The latter, actually, just assembled three U.S. Olympic athletes—soccer player Carli Lloyd, swimmer Missy Franklin and fencer Ibtihaj Muhammad—for a photo session. To the athletes' surprise, the clothing they wore was from Staples. Yes, the same Staples that is known for office supplies, and has been in the ongoing legal battle regarding an erstwhile attempt at merging with Office Depot.

According to Bloomberg, much of the clothing that Olympic athletes will wear leading up to the games will be from Staples. Staples also is making water bottles, hats, tote bags and Olympic-themed surfboards for Visa employees.

Bloomberg reported that Staples is one of two companies that paid an undisclosed amount for the rights to sell co-branded merchandise to the U.S. Olympic Committee's (USOC) sponsors. The other company is Woodinville, Washington-based BDA LLC., which ranks No. 3 on Promo Marketing's Top Distributor list this year.

"Olympics sponsors will have their entire corporate staff and VIPs wearing co-branded gear," he told Bloomberg. "Whereas for NFL partners, it's almost always consumer-facing products."

However, the athletes aren't permitted to wear the Staples gear in Rio de Janeiro, since Nike and Ralph Lauren designed the official apparel for athletes at the games, and the items can't be sold at retail outlets.