One Canadian "Star Trek" fan might find himself in the middle of a legal battle due to his license plate frame and vanity plate.

Nick Troller, a Manitoba native, had a license plate frame that said "We are the Borg, resistance is futile," referring to a race of aliens from the "Star Trek" franchise. His vanity plate read "Asimil8." 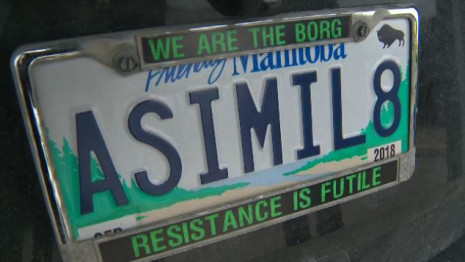 "Star Trek" fans make the connection right away: The Borg often said "resistance is futile" and threatened enemies by telling them to assimilate. However, Manitoba Public Insurance (MPI) confiscated the plate after receiving complaints from two indigenous Canadians who took offense to the word "assimilate," according to CTV.

The Justice Centre for Constitutional Freedoms (JCCF) say the driver should get the license plate back, as the MPI's decision violates freedom of expression.

"Either we have the right to express ourselves to say what we think and believe, or we have a right not to be offended," John Carpay, founder of the JCCF, told CTV. "When there's a conflict between those two, and there always is, government ought to come down on the side of free expression."

The JCCF also said it would file paperwork to get the license plate back after the MPI refused to do so.

"It's important to hold governments accountable when they violate our freedom of expression," Carpay told CTV.

Pizza Hut Will Use Branded Trucks, Scooters and Bikes for Deliveries During Super Bowl
Comments
The Top Lists