I finally got to see "Star Wars: Episode VIII - The Last Jedi" last night. I won't spoil anything for you, because I barely made it a few days without hearing about some plot point. There is one part of the movie that I will discuss today, and don't worry, this won't spoil anything. How could it be a spoiler if you've likely seen it everywhere in marketing campaigns?

I'm talking about Porgs. Don't know what Porgs are? You probably have seen them in a commercial, on a toy or on some sort of packaging. They're these adorable little creatures in the new movie that look like if you bred an owl, a puffin and a Russian nesting doll to create one cuddly, curious little pack animal. They are the cutest thing I've seen in a long time, and they have absolutely nothing to do with the plot of the film.

So, why are they used on so much packaging?

"Star Wars" fans can back me up when I say that every trilogy of the movie—the originals (Episdoes IV through VI), the prequels (I through III) and the sequels (VII through the upcoming IX)—have included at least one "cute" character/thing for maximum marketability. Sometimes, they have strong ties to the plot, other times, like the Porgs, they just really lend themselves to marketing.

Let's venture back to the original trilogy here, shall we?

The American Marketing Association (AMA) noted the 1980 release of "The Empire Strikes Back" as "the beginning of the mega-movie marketing era." George Lucas himself alluded to having the idea for R2-D2 (who's pretty cute) mugs.

Ewoks played a pretty pivotal role in the next film, "Return of the Jedi," but they also played a crucial role in marketing the original trilogy's finale in 1983. According to numbers from the AMA, the flick grossed the inflation-adjusted sum of $784.4 million.

While Ewoks and their teddy bear cuteness may not be solely responsible for those numbers, it couldn't have hurt. Lucasfilm was obviously aware of that, as the following year it released "The Ewok Adventure" as a TV movie.

By the time Lucas and co. got around to the prequel series, CGI technology had become much more advanced than it was when the original three came out. So, naturally, that meant more out-of-this-world creatures were possible to design and implement into the film.

At this point, he's more of a meme and ongoing joke than a character, but George Lucas himself has said Jar Jar Binks was made as comic relief, and that the series overall is geared at children. 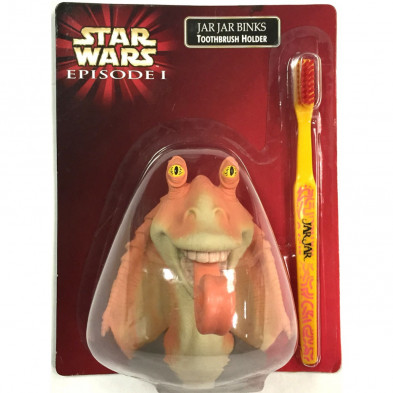 Here's the poster for "The Phantom Menace." Once you look past young Anakin Skywalker, the ominous Darth Maul face and Liam Neeson being generally awesome, you'll notice our pal JJB on the right, next to one of the series' most important characters, Obi-Wan Kenobi.

Jar Jar, in the grand scheme of things, was not important, and yet he gets this prized poster real estate next to the originator of some of the most quotable lines in the franchise.

And now, here we are in 2017, almost into 2018, and with the first trailer for "The Last Jedi," the masses were immediately keenly aware of Porgs. We didn't quite know what they do (spoiler: not really anything except for delightful squealing), but by George (Lucas), we knew they were adorable and we knew we wanted a stuffed toy.

The moral here is that, no matter how action-packed or serious a film franchise may be, there is always room for finding a safe marketing plan to fall back on.

(Spoiler No. 2: "The Last Jedi" is really good, with or without Porgs.)