Starbucks' 2018 Holiday Cups Are Here, So You Can Officially Start Celebrating

Halloween is over. That means it's officially the holiday season already, right? If you ask the majority of retailers in America, the answer is yes. Before the jack-o'-lanterns can even get gross and mushy, companies are peddling wintery products as if Thanksgiving and fall never even existed, save for a few pumpkin spice drinks still on the menu.

Before the pumpkin spice lattes were even at a drinkable temperature this year, Starbucks hinted at its holiday drinkware line back in September. September! This was part of its "90 days to Christmas countdown," according to Teen Vogue. The line included reusable tumblers, mugs, cold cups and reusable straws (which is convenient, since the company is ditching plastic by 2020).

Now that it's November, it's a little more forgivable to unveil the actual holiday cups customers will get in the stores. These are the paper cups you get when you're ordering your pumpkin spice lattes (or whatever mint one you want if you're really all in on the holiday spirit already).

Apparently, this year's design is inspired by nostalgia and "memories from the past."

Here's what Starbucks wrote about the line in a release:

Simple acts can spark a flicker of remembrance, like making snow angels, serving an old family recipe and hanging sentimental childhood ornaments. The senses can cue our memories too, like the smell of peppermint or fresh-baked gingerbread. This season, Starbucks stores are celebrating the spirit of yesteryear with a modern twist.

Specifically, Starbucks is drawing inspiration from its Christmas Blend coffee, which is available in stores today.

According to Starbucks, the company's creative team "passed around one-pound coffee bags from more than 30 years of the beloved brew" and "talked about old stories, remembering an unexpected gift for a customer at the Pike Place store, and former coffee buyer Dave Olsen delivering Christmas Blend to Seattle area stores from the roasting plant in his pickup truck."

The Starbucks marketing department is, after all, a Hallmark card personified. They all probably wore comfy sweaters and gripped steaming mugs of coffee with two hands, holding it close to smell the aroma, warming their hands along with their whole body in holiday spirit.

"Looking back at our heritage, we found something lovely in our own story, with beautiful coffee and flavors that come together to make the season magical," Kristy Cameron from Starbucks Creative Studio said.

Cynicism aside, Starbucks did a pretty solid job on the cup design. They're fairly timeless, which touches on the whole nostalgia thing. You have your red stripes based on ribbons on gifts, you've got the holly design, there's a Houndstooth design like you'd see on your aunt's sweater, and there's a top-of-the-tree star design that also kind of looks like a sweater in a way. 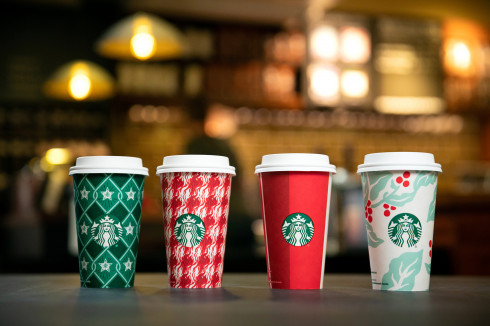 There are no real surprises, but it'd be sort of strange if Starbucks went for something too over-the-top for its holiday designs. Despite "ugly sweaters" being in fashion right now, thanks to irony being the main ingredient in everything these days, you can't beat the classics.

Starbucks obviously knows this. So, whether you're ready for the holiday season or not, it's here as far as Starbucks is concerned. For us, it's just a little too early.

Now, if you'll excuse me, I have to go deny Bob Cratchit a day off for Christmas. Bah Humbug.