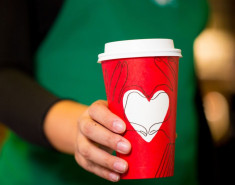 We were big fans of last year's Starbucks holiday cups. If you recall, the coffee giant released 13 festive designs, all in the classic holiday red, and consumers were delighted. This year, coffee-drinkers had mixed reactions to Starbucks' coloring book-inspired holiday cups. But, it looks like the Seattle-based company finally gave everyone what they wanted: the famous red cups.

According to the company's website, Starbucks unveiled its second holiday cup, which is the first time the chain ever released a second holiday cup in the same season. The cup will make its debut in stores nationwide on Tuesday.

The new cups feature a white heart framed by two hands with the classic red backdrop. The point of the design is for customers to write the name of someone in the heart "to recognize those who fill their heart and embody goodness this holiday season," according to the company.

Both the coloring book cup and the new holiday cup were designed by Jordan Kay of the Starbucks Creative Studio.

“The red cup is a clean design, with the heart as a space where people can highlight someone in their life who makes the season special,” Kay said. “The design symbolizes the love and warmth felt during the holiday season, when we connect with friends and family.”

The new red cups are a great idea because they build upon the red cup tradition, but they also lend themselves to customization. Consumers love being able to post pictures of the cups with the names of their choosing in the center, and it's easy to get creative.

Plus, we love the overall message of the concept.

“The holidays are about remembering what it means to give love and put goodness out into the world,” said Leanne Fremar, executive creative director for Starbucks. “We loved the idea of celebrating the good in each other this holiday season.”