The fight against single-use plastics is gaining momentum, as more and more countries, cities and businesses are phasing them out in favor of more eco-friendly options.

The latest news comes from Starbucks, which announced that it plans to phase out plastic straws at all of its locations by 2020.

Rather than go the route of paper straws, as some environmentally-focused companies have done, Starbucks is adopting what some people have called an "adult sippy cup"—a plastic, straw-less lid.

It's not too different from plastic lids you'd currently get on a single-use cup, really. However, NPR reported that the lids are part of Starbucks' $10 million investment to create recyclable and compostable cups. 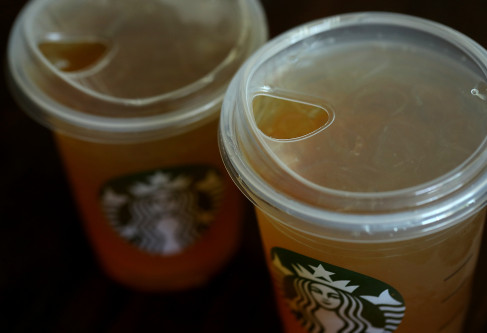 A new flat plastic lid that does not need a straw is shown on a cup of Starbucks iced tea on July 9, 2018 in Sausalito, California. Starbucks announced that it plans on phasing out all plastic straws from its 28,000 stores worldwide by 2020. Some of its drink cups will be fitted with special flat plastic lids that can be used without straws. | Credit: Getty Images by Justin Sullivan

"For our partners and customers, this is a significant milestone to achieve our global aspirations of sustainable coffee, served to our customers in more sustainable ways," Starbucks president and CEO Kevin Johnson said, according to NPR.

It's convenient timing for Starbucks, too, considering its home city of Seattle just passed legislation to ban single-use straws in restaurants. That rule went into effect July 1.

Seattle's legislation isn't quite as hardcore as in Mumbai, which has dispatched authorities to fine citizens and businesses for using single-use plastic bags in the Indian state of Maharashtra. If caught, people and businesses face large fines and, potentially, jail time.

Despite the idea of limiting waste being good on paper, large multinational companies like Amazon, Pepsi and H&M are lobbying to soften Mumbai's strict rules.

"Our demand to the government is: Give the industry seven years to come up with alternatives," Neemit Punamiya, general secretary of the Plastic Bags Manufacturers Association of India, said at a meeting with Maharashtra government officials, per Reuters. "It cannot happen overnight—we've got investments, we've got loans to pay and people to manage."

Maharashtra's environment minister replied by saying that the government would relax laws for neighborhood grocery store, allowing them to put items like rice in plastic, but would make it mandatory for customers to return the packaging for recycling.

Another senior official told Reuters that the government could allow some online retailers to use plastics, or at least give them a grace period, but nothing has been made official yet.

What is clear is the wave of environmental consciousness in the form of limiting plastic waste is growing, and with good reason. Studies have shown the immediate benefits of limiting single-use plastics. If these efforts continue—and it appears they will—that could mean more selling opportunities for promotional products companies able to provide sustainable alternatives to single-use products.