Starbucks Wants You to Color All Over Its New Holiday Cups 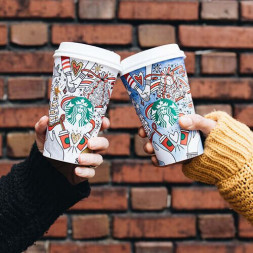 To those who go gaga for java, Starbucks, with more than 26,000 global locations, holds a warm (and often sugary) place in their hearts. That affection takes on added significance come this time of year, as the entity’s brain trust, having let its ideas brew for a bit, unveils holiday cups to tie in with the spreading of goodwill among friends and family members. Said holders have not escaped inclusion on a few end-users’ naughty lists, but the 20th anniversary of the seasonal containers does not figure to frustrate many folks, as the company is courting consumers’ creativity by adorning the latest goodies with images to color.

While Starbucks already does a fine job of helping patrons show off their individuality, especially through what food website Delish dubs a “secret menu” (who has not heard someone place a beverage order that takes at least 10 seconds for a barista to make sense of?), this campaign will likely find the masses decorating establishments with praise for giving them another means to enjoy some serious levity. Plenty of people could not care less about which designs, if any, adorn their cups when they request coffee, but the throngs who do appreciate a considerate depiction will take pleasure in making some in-store artwork or returning home to use their kids’ crayons.

“We love the idea of everyone making this year’s cup their own,” Leanne Fremar, executive creative director for Starbucks, said of the novel approach to coupling coffee with the chief time of the year when end-users need a pick-me-up as they juggle crazy schedules, exams, family gatherings and shopping outings, and contemplate how they can help the less fortunate through charitable donations (or so we hope).

Following the aforementioned 2015 snafu that proved a key component of what detractors consider a widespread War on Christmas, Starbucks last year made amends by giving the cups more of a festive feel, and this current offering does an even more compelling job at reducing critiques over how it blends the marketing of drinks with the observation of the major Christian holiday. Many people do not let any trace of controversy intrude upon their November and December coffee consumption, and for them, this promotion might boil down to considerations of how well they can stay within the lines. Starbucks’ cups have drawn recent criticism, and while no concept from the Seattle-based juggernaut—short of one that thoroughly addresses the opposition’s gripes—will ever win universal appeal, this anniversary signifier, with a Christmas tree, presents and a pair of doves, among other elements, will definitely provide end-users with an extra reason not to rush back out into the cold. In other words, expect Starbucks to color itself pretty successful come January.

Make Your New Hire a Success