The Status of West Coast Ports 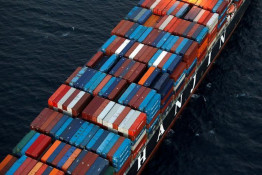 On a concrete strip of coastline in sunny Southern California, the Port of Long Beach acts as the gateway for a hefty percentage of the promotional products imported from Asia. As the second busiest container port in the country, Long Beach has weathered its share of storms in recent years.

There was the series of work stoppages in 2014 and 2015 that clogged the Pacific coast with shipments waiting to be unloaded. And last summer, the financial collapse of South Korean shipping giant Hanjin Shipping left one of Long Beach’s most highly trafficked terminals in disuse for months, causing cargo volumes to fall. Last year, the port handled 3.4 million twenty-foot equivalent units—the standard measure for shipping containers—down 200,000 units from 2015.

At the same time, the neighboring Port of Los Angeles saw an increase in its cargo volume. The smooth operation of Long Beach and other West Coast ports is critical to the promotional products industry, which imports much of its merchandise from Asian manufacturers. It’s important for those who operate in the supply chain to be aware of the potential for stoppages and slowdowns in trade and transit, not just due to labor issues, but with compliance and security standards, too.

Jonathan Gold, vice president for supply chain and customs policy for the National Retail Federation, identified some of the rules that govern whether merchandise is stopped at a port or goes through smoothly. Gold, who previously worked as a policy analyst for U.S. Customs and Border Protection (CBP), is well versed in maritime cargo security and trade issues.

“The security aspect actually starts well before the cargo ever arrives at the port,” he said. The SAFE Port Act, passed by U.S. Congress in 2006 as an antiterrorism measure, includes a provision called the Importer Security Filing, Gold said, which requires that CBP performs risk-based targeting of outgoing merchandise in foreign ports about three or four hours before the shipment is scheduled to leave for the U.S.

For importers who are looking to speed up the process in the event of a CBP security check, Gold said the agency runs a voluntary program that allows importers to inform CBP of what their security programs are, and CBP will provide incentives such as reduced security inspections.

The next step for promotional products making their way overseas comes at ports like Long Beach, where inspectors for CBP and the Consumer Product Safety Commission (CPSC) identify shipments that have been flagged by risk-targeting technology for possible security and health and safety violations.

James Joholske, director of the Office of Import Surveillance for CPSC, said the agency mainly looks for merchandise that could contain high amounts of lead, banned phthalates and banned small parts in children’s products, as well as administrative issues like tracking labels, product registration cards and certificates of compliance. In the fiscal year 2015, CPSC stopped 10.5 million products that violated U.S. safety rules. In order to identify these violations efficiently, Joholske said CPSC relies on a
layered approach.

First, the agency uses a risk-targeting system called a Risk Assessment Matrix that is based on a feed of data sent by CBP for all shipments under the consumer products designation. This system is available to CPSC staff who operate locally out of ports such as Long Beach, so they can target shipments in real time.

Another branch of risk targeting is operated through a collaboration between CBP and CPSC at the Commercial Targeting and Analysis Center, a facility that encourages information sharing across several government agencies. CPSC uses the facility to locate high-risk shipments on a national level, Joholske said.

“We’ve got a number of risk inputs that we use as part of the risk identification process, so we’re trying to identify products and shipments that are high risk, but also support legitimate trade,” he said. “So, if there are no risk factors associated with a shipment, we want that shipment to be able to move through the ports as quickly as possible. If there’s no risk, we don’t need to be involved.”

To prevent shipping from being interrupted in a government examination facility, it’s a good idea to read up on the regulations in the Consumer Product Safety Improvement Act and keep an eye out for health and safety slip-ups on the overseas link in the supply chain.

As for the labor situation at Long Beach and other West Coast ports, Gold said to look out for 2019, when the International Longshore and Warehouse Union contract is set to expire again.