Steph Curry Wishes His Bobblehead Had a Beard 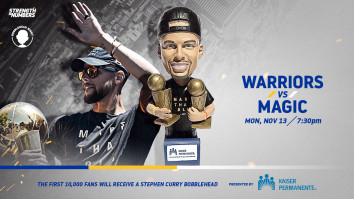 Steph Curry had to sit out his eponymous bobblehead night, but his Golden State Warriors won to improve to 11-3. (Image via nbcbayarea.com)

Steph Curry will turn 30 on March 14, but do not let the man’s birth certificate fool you. He still looks as if he is going through puberty, with many fans of the Golden State Warriors Guard contending that he appears even younger than that, hence their estimation of him as the Baby-Faced Assassin. As a nod to his instrumental role in guiding the team to two out of the last three league titles, the franchise distributed bobbleheads of the two-time National Basketball Association Most Valuable Player last night yet drew a playful rebuke from the sniper for forgetting to include the beard that he is fashioning as he approaches the Big 3-0.

“What’s all this hard work for?” the 2016 scoring champion said, via a promotional video, of his neglected follicle feat. “Everything else looks good, though.”

The collectible acknowledged that Curry does indeed possess the ability to grow facial hair, though, by depicting him with a goatee. The beard, however, has become a staple of his style for most of this year, and its follicles fetched a few reactions in the late spring as he and his supporting case, namely Klay Thompson, the other member of the Warriors’ Splash Brothers duo; and future Hall of Fame lock Kevin Durant, overcame the Cleveland Cavaliers four games to one to win the championship. It definitely gives him a bit of an added edge as he breaks ankles and drains three-pointers, but your humble scribe is going to say that it does nothing to make him look older.

Frankly, the man could grow it out until ZZ Top could recruit him to join (I have always found it funny that drummer Frank Beard is the only member of the Texas trio not to sport a chest-length beard) and still appear as if he’s not old enough to drink alcohol. Sadly, Curry could not compete at Oracle Arena last night, as a bruised right thigh led coach Steve Kerr to sit him out. No matter, his squad still nabbed its seventh-straight win, putting a spell on the Orlando Magic to up its mark to 11-3 and tie the Houston Rockets as the Western Conference’s pacesetter.

One need not be Albert Einstein, the owner of a very famous mustache, by the way, to predict that the Warriors will prove difficult to slay come playoff time. If Curry and his crew can secure a third championship come June, people will intensify dynasty talks, and the organization, if the face of the franchise keeps shunning razors, might need to make amends next year with an appropriate bobblehead. Otherwise, things could become a little hairy between Curry and the Warriors’ brass.