Online publishing is a precarious game right now, and has been for a while even before the pandemic affected advertising revenue. Within the music publishing world, big names like Rolling Stone and Spin even fell victim to a weird period where the “pivot to video” strategy didn’t turn out to be the cash cow they were promised, and other publications have been hollowed out by private equity.

Stereogum, a popular music site that started in the early 2000s, has been working hard to avoid a similar fate at the hands of private equity or simply calling it quits for lack of funding by launching a crowdfunding campaign. Part of it is a humongous album of covers of ‘00s music from artists like The National, Death Cab for Cutie, Mac DeMarco and just about every alt rock/punk band that certain PM staffers talk about on a daily basis in our Microsoft Teams chat.

But, aside from the album, Stereogum is relying on past promotional merchandise to sweeten the deal, hoping the bygone nature is enough of a novelty to generate a few more dollars in donations from readers.

There are five different T-shirt designs, including ones that parody band logos like REO Speedwagon’s. For the “Backstage” level of contribution, there’s an exclusive merchandise bundle that includes a T-shirt, sunglasses, Stereogum-branded chewing gum that was featured at its 2019 South by Southwest party, posters from previous concerts and events, stickers, and Stereogum matchbooks. 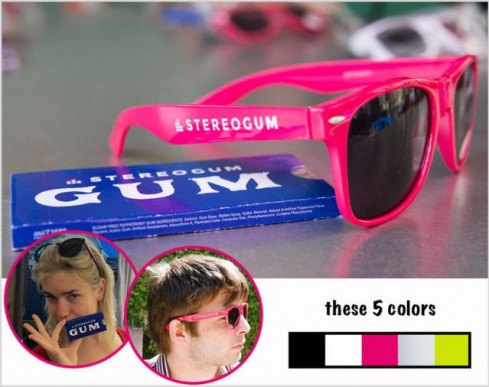 This sort of feels related to all of the merchandise left over from mega-branding events in the music industry, like SXSW, too. Obviously those events didn’t happen, so the merchandise that would have been available in spades is just sitting around.

It also speaks to the sentimental nature of products like these. For all of the “trinkets and trash” talk that is thrown around about the promotional product industry, something as small as a matchbook or a pack of gum instantly becomes enough of an incentive to draw fundraising backers. It’s not even like they’re decades old. If the brand attached to the product is something people have a positive connection to, the product becomes that much more valuable.

And now the products have a second life in the form of campaign giveaways. There are the people who have the gum from 2019’s SXSW event, and they’ll remember the fun they had there, and now people will have it as a souvenir from the time they helped save a digital publishing favorite.

Maybe some day all of the stuff we give away at PM Power Meetings will carry such sentimental weight. Do you have any Power Meeting stuff that you still have around the house or the office? Let us know. We’d love to see it.