"Stranger Things" has done a good job of boasting businesses through wardrobe choices in its second season. The first recipient of free publicity through apparel was the Science Museum of Minnesota, which had a boost in apparel sales and interest after the character Dustin wore a sweatshirt on the show.

It seems like Dustin might be the key to advertising this season, as the character also wore a promotional T-shirt advertising a Missouri Orthodontist's office. 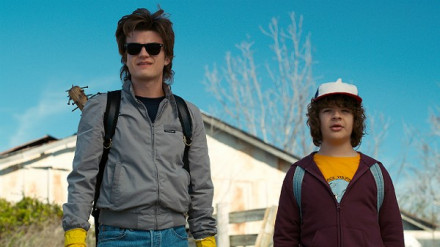 The character Dustin (right) on 'Stranger Things' wore a T-shirt given out by an orthodontist in the '80s. | Credit: Riverfront Times by Netflix

This one was a little tougher to spot, however. But, some eagle-eyed internet sleuths managed to recognize the design peeking out from under Dustin's jacket. This is where you have to really give the costume department props: The show is based in the 80s, and, according to Riverfront Times, that T-shirt was originally given out more than 30 years ago.

Dr. Wes Allai said that he created the design, which features the slogan "Brace yourself for the future" in 1982, shortly after he started his practice. 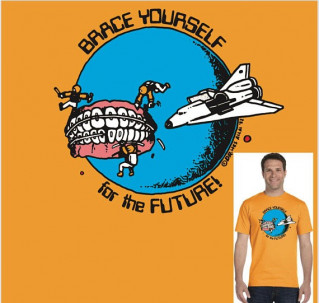 Brace yourself for more genius promos like this to resurface in the future. | Credit: Riverfront Times

The character of Dustin is a good choice for this T-shirt. For the uninitiated, the character (and actor Gaten Matarazzo) have cleidocranial dysplasia, which affects the growth of some teeth.

One might first think that this was Allai practicing marketing genius, sending a few T-shirts to the show's producers as an incentive to put his logo in front of the camera. But, in reality, he has absolutely no idea how the shirt ended up in California, let alone on the set of a major show.

Brace yourself for the future of apparel giveaways.