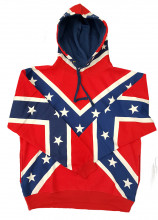 A high school in Pennsylvania recently banned all apparel featuring the Confederate flag, and some students have taken to protest, according to Yahoo.

The ban came to be after a student complained that a fellow student wore a hoodie with the image. At first, the student was reprimanded for the clothing choice, but later was allowed to continue wearing the apparel.

“To wear the Confederate flag in a classroom environment, in a school environment, it was very disruptive and upsetting to my child,” Robert Williams, the father of the student who complained, told CBS Pittsburgh at the time.

“As an educational institution, we view this as a learning opportunity for our children and encourage all families to discuss how these symbols can cause fear or anxiety in others,” Glasspool wrote in a statement. “The practice of ethnic, religious, racial or gender-charged symbols that profess hatred, bigotry, or oppression has no place in any learning institution and will not be tolerated in Plum schools.”

Once the ban was put into place, several students decided to protest.

“I’m sitting out here today because I’m fighting for my rights to wear this Confederate flag to school, because it should be allowed," Kelsey Evans, one of the student protesters, told Yahoo. "It’s not racist. It doesn’t mean slavery. It’s just simply a Southern flag. I’m fighting for what I believe in, because so many people think it’s racist, but it’s not.”

Because there's very little legislation that covers protocol for clothing disciplinary action, many schools have to make these decisions themselves.