Thanks to the production of many television shows and motion pictures, California often receives a bad rap as a land of excess. Due to its population, that estimation can definitely extend to considerations of residents’ use of resources, particularly plastic products. In November, California became the first state to ban single-use plastic bags, but its Alameda County introduced an ordinance nearly four years before the overall suppression, resulting in a 210 percent increase in reusable holders, according to a study by StopWaste.

The entity, responsible for overseeing the county’s waste management, also noted through informal observations and chain stores’ purchasing data that many shoppers have chosen to avoid using any bag, leading to a 280 percent dump in that statistic by 2015, the last documented timeframe for its three-year study. The tallies dovetail nicely with statewide calls to envision an environment minus the ubiquitous presence of the single-use options. 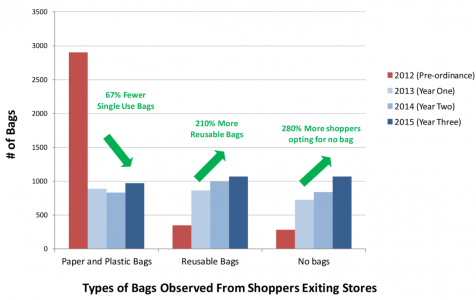 StopWaste constructed this chart to reflect the diminished reliance on single-use plastic bags. (Image via StopWaste.org)

“We’ve seen an 80 percent reduction in the number of bags—paper and plastic,” StopWaste senior program manager Meri Soll said, noting that the 69 businesses went from using 50 million paper and plastic bags annually to a total of just 10 million.

Her environs, which has Oakland as its county seat, and 150 cities and counties enacted legislature ahead of the full restriction. Their diligence has eliminated more than five billion plastic shopping bags each year and all the affiliated litter and waste, totaling 66 million pounds of plastic, with Soll’s county, according to Californians Against Waste, reporting a 44 percent decrease in the amount of plastic bags found in storm drains.

The six-month-old ban, like the aforementioned ordinances, calls for 10-cent fees for the individual use of paper bags or thicker, reusable plastic bags. Without the temptation of relying on single-use bags and faced with the prospect of sparing a dime each time the other options meet their eyes and ears, consumers are entering sites with their own containers or are abandoning any carriers.

“The 10-cents charge actually really affects how the consumer behaves at point of sale,” Soll said. “A bag that used to be free and now you’re charging 10 cents [for] actually gives the consumer pause.”

When her unincorporated county kicked off 2013 with the ordinance’s institution, it and 14 incorporated cities gave drug, grocery and liquor stores the chore of nixing the availability of single-use bags. On May 1, the Reusable Bag Law for Alameda County added retail locations, and come November 1, restaurants and food trucks will need to comply. The expanded implementation calls to mind questions of how beneficial the replacement bags are to the environment and how many uses of them must occur to equal one use of the maligned carriers. An Alameda County environmental impact report provides the answers, leaving Soll to surmise, “We do know that once you have a reusable bag and you’re using it over and over, the environmental savings always outweigh something that can be used once.”