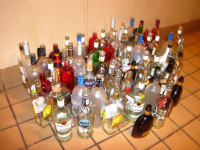 A new study finds that teenagers who own items, like hats, T-shirts and can coolers, branded with alcohol company logos are more likely to drink.

According to the Rapid City Journal, Australian researchers analyzed 13 studies that focused on alcohol-branded merchandise and teen drinking. Four of the studies specifically focused on young people who hadn't yet started drinking alcohol. The researchers claimed that those who owned alcohol-branded items were more likely to start drinking one year later.

Sandra Jones, the study leader and director of the Centre for Health and Social Research at Australian Catholic University, said in the study that there is a connection between owning the items and a desire to start drinking.

Jones added that having these items allows young people to project characteristics associated with the particular brands, adding them to their own identities and senses of self.

In order to keep young people from developing drinking habits during adolescence, Jones recommended that alcohol-branded clothing should not be available in children's sizes, and that alcohol-related toys that appeal to children should be discontinued.

"Many of these items are given away for free at promotional events or as gifts with purchase," Jones said, according to the Rapid City Journal. "And parents may hand them on to their children—or allow others to do so—without processing the fact that they are providing their child with extended exposure to an advertisement for an alcohol brand."