Study Shows We Change Our Way of Thinking Around Political Logos 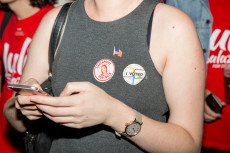 A study shows that political imagery can change how people think, contrasting a Supreme Court decision that Minnesota's ban on political apparel and accessories at the polls was unconstitutional. | Credit: Getty Images by Scott Heins

In June, the Supreme Court ruled that Minnesota violated the First Amendment's Free Speech Clause by prohibiting voters from wearing political apparel and accessories at the polling place.

The reasoning behind the initial prohibition was that wearing apparel or buttons supporting a candidate could have an affect on someone else, unfairly swaying their vote, sometimes even subconsciously. While SCOTUS struck down the legislation as unconstitutional, a recent study shows that Minnesota might have been on to something.

Even though most voters have their minds made up by the time they get to the polls, there's very real evidence that political imagery has an impact on their decision-making process, especially when it comes to analyzing data correctly—a necessary factor in choosing a political candidate and important issues.

A study published this month in the Proceedings of the National Academy of Sciences details how we change our way of thinking when political alignment comes into play.

It's an interesting read, and you can get the full gist on PBS, but it boils down to this:

Subjects were given access to custom-made social media networks, where they were faced with data regarding Arctic ice melt rates. Subjects in one group were able to see others' political alignment (Democrat or Republican), while another was completely anonymous, and a third showed an image of a donkey or elephant (the symbols of the two parties) at the bottom of the screen. Three of the groups were allowed to interact with each other by sharing predictions for what they think will happen next, given the data presented to them. The fourth group involved everyone acting alone.

The study found that when subjects were allowed to discuss the data without knowledge of each others' political leanings, they came to the correct conclusions about the information presented. When subjects were aware of each others' stance, tribalism flourished, and the subjects became more stubborn, unable to concede any points the other "team" might be making, which forced some subjects to come to incorrect conclusions.

The most striking thing, though, was that the same thing occurred in the group with the donkey and elephant images. Even though participants in that group were not aware of other participants' political leanings, the mere presence of political logos led them to draw partisan conclusions.

The takeaway from all of this? Politics is a team sport, and Americans are committed to their sides. Logos alone were enough to distort a person's cognitive reasoning.

This social learning was nonexistent in the network where people could view each other’s party leanings. Republican and Democrats remained stuck in their relative positions, suggesting that partisanship gets in the way of collective intelligence. This pattern held even for the social network that simply showed the party logos without individual allegiances.

The study underlines a phenomenon known as priming—the inclusion of imagery that acts as partisan cues to sway someone into thinking (and, in politics, voting) a particular way. These visual cues are especially effective on people who are facing issues for the first time or undecided on something.

"When people are reminded of their partisan identity—when that is brought to the front of their minds—they think as partisans first and as 'thoughtful people' second," Dannagal Young, a communications psychologist at the University of Delaware, told PBS.

Young added that logos change the way we process goals and desired outcomes. People distort facts in their head to conform to their ideology and social beliefs to fit in with the crowd in a form of confirmation bias. This is on both sides of the political spectrum.

Really, it boils down to our base instincts as animals that traveled in packs. More recently, it relates to the desire to belong we all felt growing up and into adulthood.

That's where it comes back to political apparel at polling places. could certainly apply to voters who are on the fence when they get to the polls. When a voter who isn't locked in to his or her decision arrives at the polls, a visual indicator on a T-shirt or cap could be a thumb on the scale, even if they don't consciously know it.