Among the four major professional sports, the National Basketball Association definitely registers as the flashiest league, as some of the world’s greatest showmen engage in pulse-pounding action for their riveted fan bases. Clutch shots, awe-inspiring passes, huge blocks and monstrous dunks have made many teams consistently admirable draws, with the last element of that quartet being a particularly bankable source of delight. For as long as he dons a uniform, though, frankly, I could envision him powering for buckets as a senior citizen, Milwaukee Bucks superstar Giannis Antetokounmpo will always win regard as an exemplary rim wrecker. And even though the two-time All-Star figures to frustrate defenders for years to come, he has already made known that he will not use his aerial feats to embarrass said adversaries, as he told his employer to cease selling a T-shirt that commemorates a February flush. 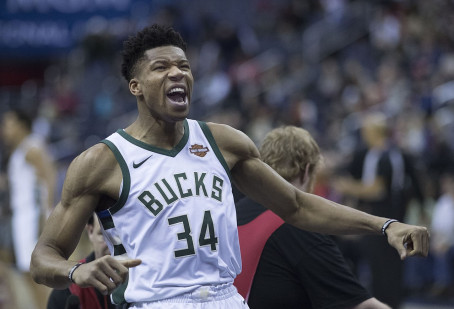 The Milwaukee Bucks are making a playoff push thanks to superstar forward Giannis Antetokounmpo. | Credit: Wikipedia

The pro game long ago lost its appeal to me, but a few performers excite me, and number Antetokounmpo among them. The 23-year-old has immense talent, a great sense of humor and an abundance of admiration for his club’s opponents, no matter how much he wishes to saddle them with losses. The Bucks have stopped the New York Knicks in their tracks three times this season, with the last two victories inspiring the aforementioned shirt and the subject’s call for its suspension. On Feb. 6, in helping the visitors to a 103-89 triumph at Madison Square Garden, the league’s third-leading scorer skied high to deposit a deuce, taking off over Tim Hardaway Jr. to do so.

Antetokounmpo has become a reliable dunker since his 2013 debut, but the Bucks, presently the holders of the Eastern Conference’s final playoff spot, thought enough of that leap to laud it through the shirt. To intensify the commemoration, the organization unveiled the top ahead of the Knicks’ Friday visit to the Bradley Center. Of being the depicted recipient of the jaw dropping athletic display, Hardaway told the New York Post “That’s back in the past. We’re moving on.” Antetokounmpo apparently feels the same, as he reportedly told ESPN’s Eric Nehm that marketing the item did not strike him as a particularly reverent move.

The sports world will always stand out as a great example to use when people wish to study competition, with lucrative contracts and merchandise sales among the top reasons that athletes compete so hard. Television and social media exposure makes the NBA an exceptionally appealing contributor to such infatuation, and while viewers can always relive the powerful slam via their preferred means and devices, his gesture shows that Antetokounmpo believes it should live on only that way. Cluthpoints speculated that the NBA could follow the lead set by the hoops franchise, who deleted a tweet featuring an image of the garment, in deciding to buck the trend of trying to earn a buck at all costs.

The Bucks will return to the scene of the slam April 7, by which time only four days will remain in the regular season. The guests will likely have secured a playoff berth by then, and, well, the Knicks will be nearing the end of their fifth-straight playoff-free slog. One can certainly expect that Antetokounmpo will be looking to make potential postseason combatants take heed through a few more dunks, and here’s hoping that Hardaway, no matter his defensive prowess and lineage, moves out of the way if the Greek Freak comes charging.

At a time when, as mentioned earlier, the goofiest ideas, accomplishments or mindsets can lead to money-seeking ventures, it is refreshing to see Antetokounmpo boxing out the powers that be and encouraging a bit more respect for the competition. In a dog-eat-dog world, the young man is far beyond his years for having done so.