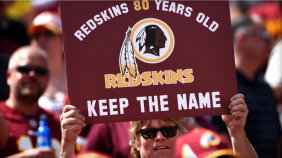 For the past few years, there's been quite the intense debate stirring about whether or not the Washington Redskins should change their name, since it's considered offensive to Native Americans. As a result, the U.S. Patent and Trademark Office canceled six Washington Redskins federal trademark registrations in 2014.

But, the team didn't accept that answer, and decided to file an appeal to the Supreme Court on the grounds that the canceled trademarks are a violation of the First Amendment. The court's decision didn't go the way the team had hoped, according to CBS News. The Supreme Court rejected the Washington Redskins' appeal this week.

In a similar case, an Asian-American rock band named The Slants went to Federal Appeals Court to petition a denied trademark. The band tried to trademark their name in 2011, but the U.S. Patent and Trademark Office ruled that the name disparages Asians, and, therefore, is a violation. A federal appeals court granted the band's appeal, and now, the Washington Redskins are trying to use that court case to its advantage.

For now, the team will have to seek an appeal at the federal court level. We will update you as the story develops.