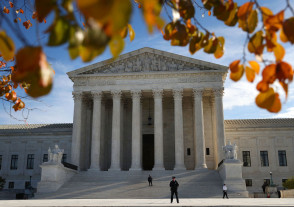 We've got some interesting news at the intersection of First Amendment rights and decorated apparel. According to the Washington Post, the Supreme Court on Monday decided that a federal ban on registering "immoral" trademarks is unconstitutional.

“The most fundamental principle of free speech law is that the government can’t penalize or disfavor or discriminate against expression based on the ideas or viewpoints it conveys,” Justice Elena Kagan said, according to the Washington Post. “The ban on ‘immoral’ and ‘scandalous’ trademarks does just that.”

The ruling came as a result of the Iancu v. Brunetti case, in which Los Angeles-based artist Erik Brunetti sued the government for violating his First Amendment rights when it refused to trademark his "subversive" clothing line called FUCT. The apparel items in the collection all bore variations of the "FUCT" wordmark.

Some of the justices expressed concerns that a broad ruling like this would go too far and leave the Patent and Trademark Office powerless to refuse obscene, and even racist, branding, which could subsequently result in violence.

“Just think about how you might react if you saw someone wearing a T-shirt or using a product emblazoned with an odious racial epithet,” Justice Stephen G. Breyer wrote.

This is not the first time First Amendment rights pertaining to decorated apparel have made it to the Supreme Court. If you recall, the Washington Redskins found themselves in a legal battle that did not play out in the team's favor. So, it's interesting that the Supreme Court sided with FUCT for this case.

Kagan said that while the justices were divided on the issue, they all agreed that "the government may not discriminate against speech based on the ideas or opinions it conveys."

“The PTO has refused to register marks communicating ‘immoral’ or ‘scandalous’ views about (among other things) drug use, religion, and terrorism,” she wrote. “But all the while, it has approved registration of marks expressing more accepted views on the same topics.”

To support her point, she evidenced the fact that the office rejected T-shirts that said "BABY AL QAEDA," but approved a trademark for "WAR ON TERROR MEMORIAL."

We're sure we haven't seen the end of this battle, as it appears to leave open a number of potential issues in the future. It is unclear how a case like the Washington Redskins' would fare now, but it seems there's still a gray area that could be exploited.