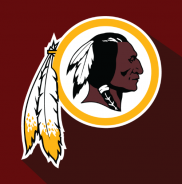 A supreme court decision regarding disparaging language could pave the way for the Redskins to reclaim their lost trademarks.

After the U.S. Patent and Trademark Office cancelled six of the Washington Redskins's federal trademark registrations in 2014, the team went on the offensive to appeal the ruling on the grounds that the Supreme Court violated free speech guarantees. In October of 2016, the Supreme Court rejected that appeal.

Around the same time, an Asian-American band called The Slants were dealing with a similar battle in court, with SCOTUS claiming the name was demeaning to Asian Americans.

But, where the Redskins failed, The Slants won.

According to Vice Sports, the band was initially denied a trademark for its name because the Patent and Trademark Office saw it as offensive and disparaging under the Lanham Act (the 1946 statute that handles trademarks and unfair competition).

In court, the band argued that its name was "an attempt to 'reclaim' the term," according to Vice Sports. What's more, SCOTUS found that the disparagement clause of the Lanham Act was unconstitutional, as a trademark is technically not government speech, it's private speech. And the First Amendment does not protect government speech, but obviously it protects private citizens and all speech.

As Vice reported, SCOTUS reaffirmed that it protects all speech, "even hateful, because ' the public expression of ideas may not be prohibited merely because the ideas are themselves offensive to some of their hearers.'"

So, what does this mean for the Redskins? Potentially, a lot. At least team owner Dan Snyder thinks so. A Redskins beat reporter for The Washington Post tweeted Snyder's overjoyed response.

Statement from #Redskins Owner Dan Snyder on Supreme Court ruling: "I am THRILLED! Hail to the Redskins."

So now, with the disparagement clause no longer an issue for Snyder and his team, the possibility exists once again for him to register trademarks for the team's name.

The Virginia Promo Bill Isn't the First of Its Kind