Though gravy gratifies many as an adornment for pasta, it is definitely not a necessity for enjoying the doughy delight. Similarly, from a fashion perspective, the lack of design components does not deem an article of clothing lackluster. While debating nutritional choices might sound appealing to members of the U.S. Supreme Court, they took the more conventional route of rendering a legal decision March 22, voting 6-2 in Varsity Brands Inc. v. Star Athletica LLC, a case in which they said design elements of the former’s cheerleading uniforms qualify for copyright protection.

Justice Clarence Thomas penned the decision in a matter dating back to 2010. The Tennessee-based victor had been desiring for him and his peers to side with its contention that the Missouri-situated defendant had violated five copyrighted uniform designs. Star Athletica had argued that apparel does not fit within the scope of the Copyright Act, which does not grant protection to “useful articles,” and that the in-question parts of the uniforms, namely stripes, chevrons and color blocks, need to be present to qualify a garment as a complete example of cheerleading attire. 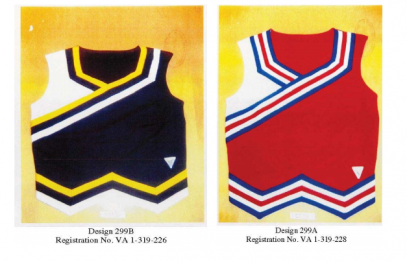 These uniform designs are among the five disputed garments in the legal battle between Varsity Brands Inc. and Star Athletic LLC. (Image via Bloomberg)

That stance had emerged with a summary judgment victory through District Court, but the Sixth Circuit reversed the conclusion, with the Supreme Court acting as a tiebreaker, so to speak. In so doing, the constituents set a precedent by addressing the eligibility of incorporated design features for copyright protection, saying they qualify when they can be perceived as two- or three-dimensional works of art separate from the useful article, with solo use or additional placement in some other tangible medium of expression permissible.

“To be clear, the only feature of the cheerleading uniform eligible for a copyright in this case is the two-dimensional work of art fixed in the tangible medium of the uniform fabric,” the Opinion of the Court explained, with Section 101 of the Copyright Act proving the saving grace for Varsity Brands, the country’s largest cheerleading supplier and owner of more than 200 copyright registrations for two-dimensional designs consisting of the combinations of chevrons, stripes and additional colorful shapes. In dissenting, Justice Stephen Breyer had hoped to show that designs and uniforms are not physically or conceptually separable, offering that the thought of removing the aforementioned elements from the surface of the uniforms and applying them to another medium without replicating the uniform itself would create “pictures of cheerleader uniforms.”

While the justices have done their part in clearing the way for granting design elements copyright protection, Varsity Brands and Star Athletica still need to litigate whether the debated-over designs themselves deserve similar safekeeping. The matter could cause uncertainty within the promotional product industry and stretch far beyond the realm of attire. With respect to apparel, last week’s ruling could make separable artistic elements of useful articles easier to register and protect, with designers getting a leg up on potentially improper applications of their handiwork.

The fact that lower courts will henceforth be frequent interpreters of the verdict means that infringement claims could arise from any unauthorized or shockingly similar use of protected material in any promotional product industry sector. To say the least, spring may prove the season of discontent for many industry presences.

Our 5 Favorite Promotional Products of the Week: Beer Can Glasses, 'Die Hard' Kazoos and More

There's Plenty of RBG Merch, Including a 'Fill That Seat' Trump T-shirt
Comments
The Top Lists