When beloved celebrities die, it's not uncommon for items like T-shirts, stickers, drinkware and pretty much any other imprintable object you can imagine to pop up in the market. But, sometimes you see complicated legal battles involving the deceased celebrity's family and how they handle his or her estate (like we saw with Prince).

But, we're not talking about Prince today. We're talking about Michael Jackson, and how the late King of Pop's likeness soon will grace items released by the lifestyle brand Supreme.

According to High Snobiety, Supreme is developing a collection of MJ-themed items, including a hoodie and T-shirt with what looks like a "Thriller"-era Jackson on it. 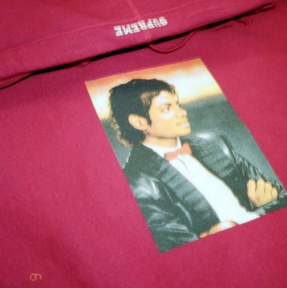 Leaks show that Supreme is planning to release a Michael Jackson-themed line. (Image via Twitter)

Supreme is wildly popular these days, and fans pay attention to every rumor and development before the items actually drop. One Twitter account called @TheSupremeSaint hinted that a full "Michael Jackson x Supreme" collection is on its way, even though we haven't see anything more than the T-shirt and hoodie. Rumors say a skateboard is on the way, too.

Supreme has immortalized other notable figures on its apparel and items, such as Muhammad Ali, Morrissey and Kate Moss.