T-Mobile isn’t the only cell phone service provider with a 5G network. It is, at least as far as we know, the only one with 5G-themed gin and ginger ale, though.

5Gin is a 94 proof, branded gin sold in a 750ml bottle, which T-Mobile says includes “piney notes and a long citrus peppery finish.” 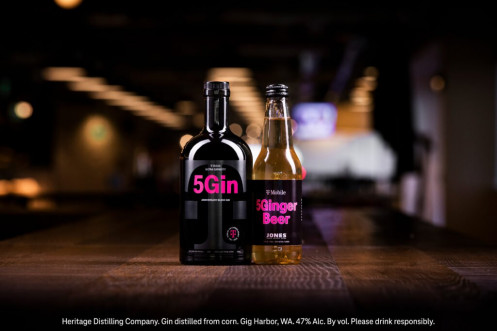 The gin was distilled by Heritage Distilling Company in Gig Harbor, Wash., and for those who don’t drink alcohol (or just don't like gin), there’s a branded 5Ginger Beer made in conjunction with Jones Soda.

“Last year, when we said we’d cover 300 million people with 5G by the end of 2021, people thought we were crazy,” T-Mobile CEO Mike Sievert said in a press release. “Now, we’ve blown by that goal six months ahead of schedule, and we won’t stop building the nation’s largest, fastest and most reliable 5G network. Now, we’re gonna celebrate in a way only T-Mobile would—by bottling the Un-carrier spirit. Yes, you heard that right. And as we begin to get back to all the things we have missed, it's time for a celebratory toast with 5Gin and 5Ginger Beer. You know the GIF from The Great Gatsby? That's me right now. Cheers!”

This is a great idea. Whether the gin is actually good or not is sort of incidental. Of course, T-Mobile will want the people who buy the gin to have a positive impression of it and, therefore, T-Mobile. But, more than anything, it’s just fun. It’s an opportunity for T-Mobile to use its branding in a different way than it has in the past, and loops in other small businesses and big-name brands, like Jones Soda, for credibility.

If the ultimate goal is a promotion that people will use and enjoy, a bottle of booze is a pretty safe call.

'The Batman' Gets Promotional Oreo Cookies, Packaging in Europe