How A T-shirt Can Get You Arrested in Turkey

You might not think that taking a walk in Turkey wearing a $5 T-shirt that says "HERO" is enough to warrant detention, but, alas, you'd be wrong. Turkish authorities have been detaining young people wearing the white T-shirts, stating that they signify support for the people accused of plotting to overthrow the government.

This past weekend, two young people were detained after being spotted on traffic cameras wearing the T-shirts while on a motorcycle ride, according to the CBC.

The pro-government media in Turkey has published articles alleging that the "HERO" shirt is actually code for "Hoca Efendi Rahat Ol," which translates to English as "No need to worry, sir teacher." In this context, hoca means a religious teacher, and the Turkish media believes this particularly relates to Fethullah Gulen, whom the Turkish government alleged was behind last July's failed coup. 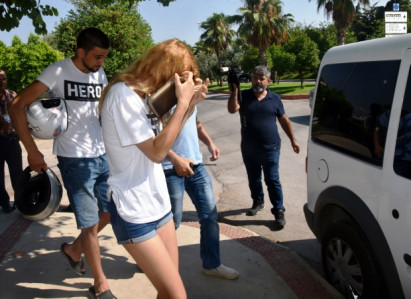 Two people are detained in Turkey for wearing the "HERO" T-shirts. | Credit: CBC

That's a lot of hidden meaning for a seemingly simple T-shirt. Psychiatrist Cemal Dindar told the CBC that it boils down to the feeling of insecurity felt by the Turkish government after last year's attempted coup.

"Symbols have replaced facts," he said. "People are trying to solve things using symbols, but everyone uses those symbols to construct their own realities."

This whole thing started on July 13—two days before the one-year anniversary of the coup attempt—when a former army officer wore the shirt to appear in front of a judge, after being accused of being part of the attempted coup.

It's gotten so far that Turkish president Recep Tayyip Erdogan wants people to wear a uniform when they appear in court, "like at Guantanamo."

Others, like Dindar, think that even the highest levels of Turkey's government are reading too far into what is a simple T-shirt.

"Constructing fantasies is an obstacle to actually discussing the real problem," Dindar told the CBC.

The people arrested for wearing the shirts maintained that they didn't know anything about its supposed ties to the coup attempt and those who planned it.

Whether the T-shirts end up being symbolic or just a way to glorify heroes of any walk of life, this matter has shown the immense power that items like T-shirts have in the world.