T-shirt cannons are probably the most fun way to deliver promotional products. Whether it's the Phillie Phanatic (the best mascot in sports. It's arguable.) launching T-shirts from his ATV at Citizens Bank Park, or cheerleaders sending them to fans in the stands, the projectile just makes a free T-shirt even more enjoyable. But, like any projectile, there's an inherent danger involved.

During a football game in Sulphur Springs, Texas, two students were using a T-shirt cannon when the device exploded, causing minor injuries for two students, including stitches for one. 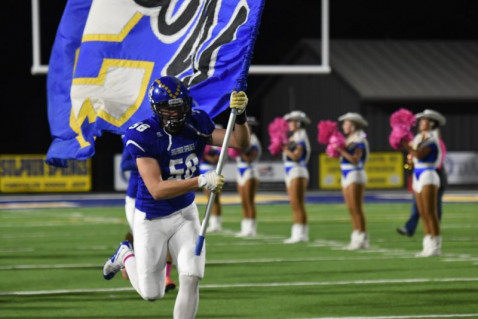 One fan in the stands received a facial injury when they were stuck by a piece of the PVC pipe that came from the cannon, but did not require medical attention, according to KSST Radio.

One witness said that pieces of the cannon "went everywhere."

At the time, the T-shirt cannon was sitting on the ground between three students, who were removing the canister of propellant, which exploded.

While T-shirt cannons are undoubtedly a fun gimmick for promotional items (or maybe even hot dogs), when people are in danger, especially children, in this case, it's best to stop using them. According to KSST radio, the school has no plans to use the T-shirt cannon anymore.

Some see them as so dangerous that they could be considered weapons, as the Queensland, Australia police force did.