In a June 2, 1897 New York Journal article, correspondent Frank Marshall White helped Mark Twain prove that accounts of his demise had been fabrications, with the famous writer, born Samuel Clemens, relaying that cousin James Ross Clemens’ compromised health had inspired theories that the far more famous member of the family had met his maker. The scribe put his contemporary and the rest of the literature-loving world at ease by stating, “The reports of my death are greatly exaggerated.” A little more than 120 years later, a Michigan resident finds herself in the same predicament as the author, as her name appeared on a T-shirt that includes the names of individuals lost to heroin overdoses. 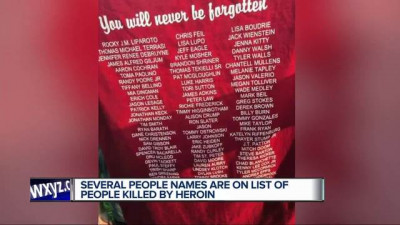 This T-shirt sought to provide funds to help those in the throes of heroin addiction. (Image by wxyz.com)

The erroneous garment has proven troubling for Katelyn Riffenberg, who became aware of the gaffe through a friend whose brother indeed succumbed to the drug. The acquaintance also finds herself frustrated, as she contends nobody gave notice that her sibling’s name would be emblazoned on the T-shirt. Riffenberg holds that she participated in a fundraiser where she signed a car to show support for a deceased loved one. However, organizer Dena Voukidis told a local news outlet that the instruction called for the attendees to write the names of those who had lost their battles against the aforementioned narcotic. Through sales at her eponymous family restaurant, the latter female obtained money for the Ryan’s Hope Foundation, hoping to aid its mission to assist addicts.

Proceeds from the altruistic yet slightly bungled gesture will, according to Voukidis, whose boyfriend’s name heads the list of fallen figures, allow for three people to acquire treatment. While that is commendable, Riffenberg, who expressed sympathy for families who are dealing with addiction’s perils, did not appreciate what she feels was an example of poor communication.

“I didn’t want my name on a shirt that had that meaning behind it,” she stated.

Not looking for a she-said/she-said confrontation, Voukidis, who came up with the idea for the T-shirt following the car signing gathering, destroyed the other tops and will look to help those in the grips of addiction to heroin, which the American Society of Addiction Medicine tabs among the opioids that are devastating the country, through another measure.