Koup, a company founded by Brian Chuang, will debut a T-shirt made from recycled bottles and infused with cinnamon extract at CES 2021 in Taiwan.

According to a press release, cinnamon contains a compound called cinnamaldehyde, which gives the T-shirt its antimicrobial properties. That’s why cinnamon is commonly used in things like toothpaste and chewing gum. 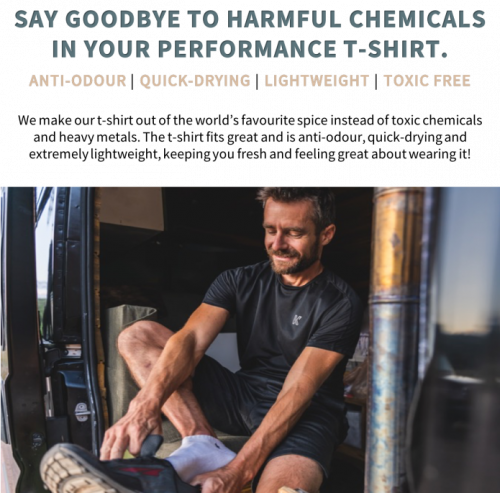 “Sweat itself does not carry odor,” Chuang said. “It is actually the bacteria on your skin (such as staphylococcus aureus) that produce odor as they feed on sweat. The way cinnamon works is that it inhibits the growth of sweat-eating bacteria. Thus, odor is not produced, keeping you smelling fresh.”

The shirt is specifically designed for travelers. In addition to the anti-stink features (anyone who has had a long trip, maybe with a few layovers, can attest to feeling less than perfectly fresh when they’re finally waiting to get their luggage), it also is 30% lighter than the average cotton T-shirt, and can be smaller than rolled socks when packed up.

“The natural anti-odor and wick-dry performance means you can bring this as the only T-shirt on your trip, which further reduces your gear,” Chuang said. “Also, the moisture-wicking property means the T-shirt keeps you dry and comfortable when you are on the go, and its thermal characteristics help regulate your body temperature.”

Oh, and in case you’re wondering, the shirt doesn’t actually smell like cinnamon.