Ah, Taco Bell. Is there anything that brightens up Taco Tuesday more than your Cheesy Gordita Crunch? Ordinarily, we'd say stick to doing what you're good at, because it's so good, but after hearing this news, we're pretty excited Taco Bell is expanding into other arenas. The fast food giant is the latest company to throw its hat into the merchandising arena, according to a press release.

Following in the footsteps of KFC and McDonald's, Taco Bell is launching a clothing line with Forever 21 that promises to be "hotter than Diablo Sauce." The clothing line features a millennial pink sweatshirt embroidered with the "Live Mas" logo, and a tank top designed to imitate a fire sauce packet. 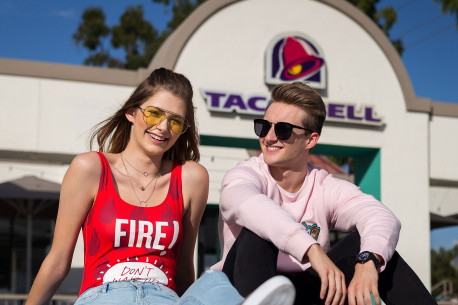 Taco Bell is teaming up with Forever 21 for a new apparel collection. (Image via Forever 21)

These are the only two pieces that we've gotten a sneak peak at, but those are enough to get us excited. Taco Bell says the full collection will include shirts, bodysuits, cropped and regular hoodies, sweatshirts and anorak jackets.

In preparation for the collection to drop, Taco Bell and Forever 21 are hosting a party in Los Angeles on Oct. 10, in which attendees are encouraged to share photos and videos on social media with the tag #F21xTacoBell. The collection will then launch in stores and online on Oct. 11.

Who will be the next fast food chain to create its own merchandise line? I'm looking at you, Popeyes!