As tonight marks the start of the NBA regular season (let’s go, Sixers!), we here at Promo Marketing have entered our favorite time of the year, as all four major sports are now sating our enthusiasm for pulse-racing performances, upset victories and legacy-defining efforts. We mean no disrespect at all to hoops, hockey and gridiron action, but baseball has our most fervent attention, as the American and National league championship series are heating up and soon will yield the combatants for the World Series title. When the foes emerge, Taco Bell will have fans yearning for more than a championship, as it will again hold its “Steal a Base, Steal a Taco” promotion during the Fall Classic, with just one stolen bag by any player resulting in a free taco for every patron.

While the giveaway will definitely delight admirers of the Doritos Locos taco, the chain is going to bat for promotional products campaigns everywhere, as it is initiating the seventh edition of the concept with a brand-specific baseball cap. Given the infatuation that end-users have been nurturing for their favorite eateries’ apparel, we fully expect plenty of consumers to shell out the $30 for the hat. True students of the promotional products world pride themselves on catering to collectors, too, and Taco Bell is looking to earn high marks by continuing its affiliation with The Topps Company Inc. to offer baseball cards commending the speedsters who put themselves in scoring position by swiping bases. 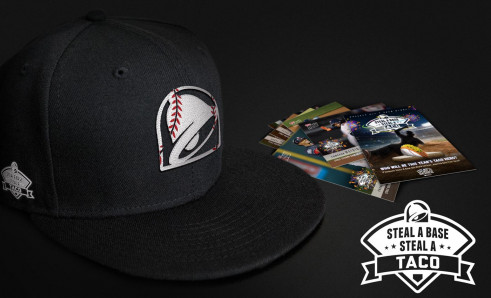 We are exactly a week away from the commencement of the World Series, so as the Boston Red Sox, Houston Astros, Los Angeles Dodgers and Milwaukee Brewers vie for pennants, every Taco Bell aficionado can also look at the teams’ rosters to see which players stand a solid chance of beating a catcher’s throw. Thus far, the promotion has endowed the nation with six Taco Heroes, whose urges to dash 90 feet between the bases resulted in successful attempts for their squads and sated stomachs for end-users.

Come this impending World Series, the first bag-nabber will not only cause revelry among taco lovers but will also find himself immortalized with a baseball card, just like his predecessors. While many hungry individuals will simply be happy to score a free taco on Nov. 1—the first day after the series if the contest goes seven games—others will be giddy to add the seven cards to their promo collectibles.

Since we admire the quickness that base stealers display, we found it a natural extension to appreciate the decision by Taco Bell and Topps to be similarly speedy, as they announced that a commemorative card honoring the first daring runner will be available at the latter’s website 24 hours after the swipe. Come the dawn of November, all seven will be together and will become a complimentary offering to fans who purchase the hat. The cards will be available in Taco Bell establishments near the ballparks that will have hosted World Series action, while the hats will be available for a limited time on Taco Bell's online store. Hat purchases will include a pack of the cards.