The U.S. and China reportedly agreed to remove additional tariffs in phases, but only after the respective countries' leaders sign an interim deal. That part is still being worked on, but Chinese Ministry of Commerce spokesman Gao Feng said China and the U.S. held "extensive and serious discussions" over the past two weeks to finally come to an agreement and end the ongoing and turbulent trade war.

"In the past two weeks, top negotiators have had serious and constructive discussions on resolving issues of core concern," Gao told the South China Morning Post. "Both sides agreed to remove the additional tariffs imposed in phases as progress is made on the agreement."

He added that, should the two countries proceed as planned, they will both roll back tariffs at a rate congruent with one another and simultaneously. Both countries could decide how much would be removed from the tariff list based on the final agreement. 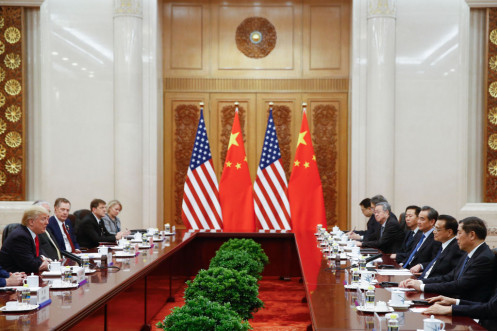 Gao also said, however, that there's no real timetable on when that interim agreement would be signed.

This would be welcome news for the American Apparel and Footwear Association, which on Monday said it was "incredibly not happy" with the current state of talks between the U.S. and China. This was at a point where the two agreed to freeze tariff escalation and China would buy more agricultural products. The problem seemingly rested in the fact that apparel products would still be on the tariff list, but that could change.

"On one hand, we're really, really happy everybody's talking, Rick Helfenbein, president and CEO of the AAFA told CNBC. "At the end of the day, we hope these tariffs will go away and that will make a difference."

China and the U.S. have agreed to cancel in phases the tariffs imposed during their months-long trade war, China says https://t.co/67kboOshEa pic.twitter.com/lUiv6tDLbZ

Helfenbein said that the deal, as it stood earlier this week, didn't benefit the apparel industry at all, as it would still be affected by the tariffs.

"When are these tariffs going to go away, because we rely on China," he added. "We need China. China is an integral part of our supply chain."

On the possibility of shifting manufacturing to other countries, Helfenbein said that, overall, domestic manufacturing isn't a realistic option to replace Chinese production.

Apparel could be a part of the rollbacks, but in the meantime, many industries are still feeling the impact of the tariffs. Furthermore, as it has been throughout this whole process, there's still plenty of uncertainty over whether an interim deal actually happens.

"I am skeptical on how fast the progress will be," Iris Pang, an economist with ING Bank NV in Hong Kong, told Yahoo Finance. "How fast the rollback will be is critical to get material and long-lasting positive sentiment for the market, as well as for both economies."