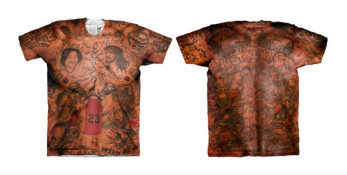 We've seen a fair amount of merchandise commemorating LeBron James and the Cleveland Cavaliers' first NBA Championship. Fans want to wear their Cleveland pride wherever they go, sharing a fraction of the feeling that the players felt hoisting the trophy. Some fans might be able to make those feelings even stronger, channeling their inner (and outer) J.R. Smith by wearing this T-shirt depicting the Cavaliers shooting guard's bare torso and countless tattoos.

"We did a mock-up of what the shirt would look like as a joke, and it went viral," Madalone said.

The idea came from Smith's seemingly constant state of half-undress after the win, prompting President Barack Obama to call Cavaliers coach Tyronn Lue and say, "Tell J.R. and everybody to put on a shirt, though. He can't just be walking around without a shirt for a whole week."

Turns out, he can. And you can have that same look, too, when you're wearing this shirt.

Madalone acted quickly after fans received the initial design positively, and had a photographer at Smith's house to take pictures of his chest and back.

In addition to the usual licensing issues that go with creating sports memorabilia, Madalone had to receive permission from the tattoo artist, Jayme "Bone" Faulkner, who tattooed Smith

"We have a cool relationship," Faulkner told ESPN. "[Smith] paid me thousands of dollars for my work, so I try to support him whenever possible."

This is a perfect example of an idea we wrote about a few months back: the concept of capitalizing on "micro moments." The recent NBA Finals, Smith's tendency to hang out shirtless and the president's tongue-in-cheek chastising created a perfect storm of internet popularity that Madalone and Fresh Brewed Tees picked up and ran with.