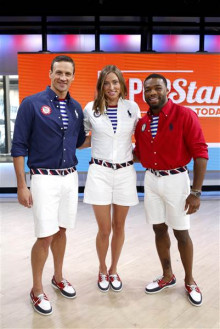 The Olympic Flame is on the move and the countdown is on: 100 days until the games begin in Rio de Janeiro on Aug. 5. But the reveal of Team USA’s closing ceremony uniforms has us excited for the big finale, too.

According to "Today," Polo Ralph Lauren designed the uniforms for the fifth time. On the show this morning, marathon swimmer Haley Anderson, swimmer Ryan Lochte and freestyle wrestler Jordan Burroughs previewed the looks.

The complete outfit features a blue-and-white striped T-shirt; a blue, red or white button-down shirt with the classic Polo Pony emblem on the front and “USA” written in bold, block letters on the back; white chino shorts; and navy, white and red boat shoes. Accessories include multicolor cotton bracelets and a diagonally striped belt.

All elements of the look are made in the U.S. and available online at Polo Ralph Lauren.

"From design to distribution and manufacturing to marketing, the parade ceremony uniforms worn by Team USA athletes for the 2016 Olympic and Paralympic Games represent the best of American talent,” a spokesperson for Polo Ralph Lauren told "Today" in a statement. “We are honored to continue our commitment to manufacturing the parade ceremony uniforms in the United States.”

The U.S. manufacturing is a point of pride for all involved. Take, for instance, the chino shorts. Ralph Lauren selected Hickey Freeman, Rochester, N.Y., as the manufacturer of the shorts, WXXI News reported. New York Sen. Charles Schumer sees it as an effective way to grow business in Rochester, as the contract will help maintain jobs in the area. 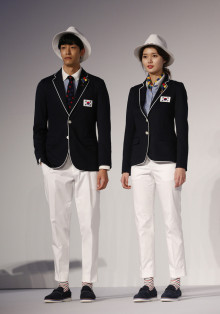 Certain aspects—like the red, white and blue color scheme, and being made in the U.S.—are common and somewhat expected. But there’s another important feature of this particular Olympics that teams may want to account for. The games are in Brazil, where the dangerous, mosquito-borne Zika virus is most prevalent.

South Korea unveiled apparel that will help its Olympic athletes stay protected when not competing, USA Today reported. In addition to outfits with long-sleeved shirts, jackets and pants, the clothing will be dyed with mosquito-repellant chemicals.

While rules and performance concerns prevent changes to uniforms worn during competition, athletes can wear these outfits during ceremonies, training and within the athletes’ village.