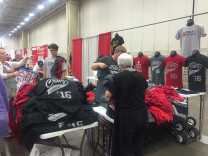 Ted Cruz merchandise was a hit at the Texas GOP convention. (Image via The Dallas Morning News)

Though his run for the presidency is over, Sen. Ted Cruz's campaign merchandise was a hot commodity at the Texas GOP convention.

Shortly after Cruz announced that he would withdraw from the race, merchandise still was available on his Web store, Bustle reported. Items, like T-shirts, posters and signs, decorated with the "Cruz-Fiorina" logo, were available for preorder.

One vendor, Rowdy Republicans, sold a Cruz football jersey, which sold online for $87, for the low price of $45 at the convention.

Other vendors focused on the de-facto nomination of Donald Trump, by selling items, like T-shirts and buttons, with slogans, such as "Trump Power, Killing Political Correctness."

Trump has been a major player in the campaign merchandise game. As we reported last week, Trump and Bernie Sanders have been the most popular candidates in terms of merchandise sales. As the election heats up leading up to each party's conventions, it's safe to say that we can expect even more merchandise to pop up.