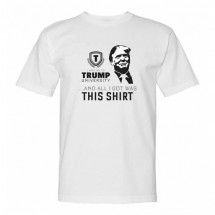 The battle among the Republican candidates continues to intensify. Now, Texas Sen. Ted Cruz  has added Trump University T-shirt to his online store. According to Bustle, The T-shirts feature the slogan, "I Applied to Trump University ... And All I Got Was This Shirt," with a fake college logo and an image of Donald Trump.

Cruz is referencing Trump's unaccredited and allegedly illegal "academic institution." The "university" recently changed its name to Trump Entrepreneur Initiative, presumably because Trump currently is being sued for the business venture, according to CNN.

The tee currently is available for preorder at a retail price of $25, and the Cruz campaign expects a large number of orders when the shirts start shipping in the middle of the month.

Cruz also is offering "Certificates of Deception" from Trump University.