Many T-shirts are so comedic that they can leave wearers and observers in figurative stitches, but other tops can inspire people to ponder what often possesses companies to have the literal fasteners bear controversial and questionable messages. Having faced backlash for its plan to rebrand the swastika as a positive symbol, Teespring altered the garments it had hoped would inspire affirmative perceptions, but it continues to hawk items sure to lead to headshakes and admonishments.

The San Francisco-situated entity, through partner KA Design, issued numerous tops that looked to refute considerations of the icon as a predominantly heinous emblem, with those classifications coming from Nazi Germany’s appropriation of a long-revered Asian symbol associated with goodness and hope. 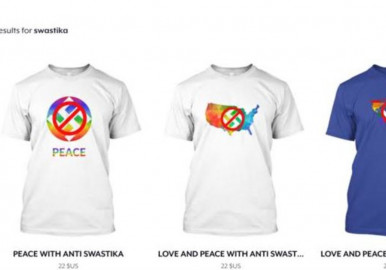 Teespring and KA Design had hoped to have end-users see the swastika as a positive symbol, owing to its roots in Asian culture, yet the former replaced it with anti-swastika products on its website. (Image via KA Design)

Through its website, the New York-based company notes it wants “to explore new boundaries, and push them forward.” Evidently, those aims, combined with the proclamation “We love humanity, love and peace” represented a cringe-worthy example of hypocrisy, leading to rebukes from such voices as Arsen Ostrovsky, executive director of the Israel—Jewish Congress, who told The Jerusalem Post that “This is not only highly naïve, but grossly offensive,” and that Teespring is striving to “turn this irredeemable Nazi symbol of hate and murder into a symbol of ‘love and peace’” to build its financial assets.

While some might see the sense of trying to remind people of the roots of the swastika, which is again in the news, it is rather unforgivable that the “Peace” T-shirt available through yesterday had the emblem rotated at the 45-degree angle that will forever call to the minds of many the suffering that Adolf Hitler and members of the Third Reich engendered from 1933 through 1945. As of today, Teespring had quelled the controversy by making anti-swastika tops, with a statement declaring, “This morning it came to our attention that a user created a number of designs on Teespring that included a swastika, a hate symbol that we do not allow on Teespring. As soon as the design was discovered, it was removed from the site.”

However, The Jerusalem Post, which uncovered the modified apparel, noticed today that Teespring still has the twisted cross on “Hitler Did Nothing Wrong” and “Hitler Did Nothing Wrong Ever” options available on its site. While one can question the fairness of the site’s frequent equating of President Donald Trump with Hitler (Hillary Clinton does not end up spared, either), the decision to hawk the garments that free Hitler of any culpability not only denies the truth of what the dictator caused for his people and millions more across the globe but also clearly catches Teespring in another gaffe, as the swastika that it is supposedly against is the non-text component of each. One wonders for how long the $22 fascist statement will be available.