Being a huge hockey fan, I enjoy watching occasional rumbles, feeling that such gritty displays nicely complement the graceful demonstrations of skill that the skaters perform. In their inaugural year, the Vegas Golden Knights have provided the chief feel-good story this season, as they have registered the Western Conference’s best mark and rank behind only the Tampa Bay Lightning for league supremacy. While I enjoy literal battles, the expansion club’s roster members and ownership personnel have become combatants in a figurative fracas, as the United States Army is opposing their team name and affiliated uniform colors, holding that the identifiers could cause confusion since its parachute unit uses the same representative title and shades.

I have yet to catch the Golden Knights in action, as they are the lone Western Conference foe that my beloved Philadelphia Flyers have not faced, but I am enjoying the excitement that they are stirring, as it definitely would have been a gamble to think they would fare well, especially being in the same division as standout franchises like the Chicago Blackhawks and the Nashville Predators. That’s why they play the games, though, but regardless of how well the athletes score and prevent goals, the Army is concerned with what they dub themselves and which hues they don. The U.S. Armed Forces’ largest branch enlisted the help of the United States Trademark and Patent Office on Wednesday, hoping the body will help it to chide the Golden Knights for the aforementioned selections. 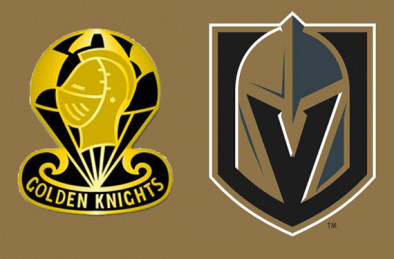 Since last summer, the Vegas Golden Knights, right, have drawn the ire of the United States Army, which fields a parachute team with the same name. | Credit: Sportslogos.net

With respect to the first gripe, the Army, in filing a notice of opposition, posits that it has used “Golden Knights” since 1969 to refer to its parachute team, with Sports Illustrated reporting that the squad’s members have participated in more than 16,000 shows. The latter objection rises from the Army’s contention that the newbies have “chosen and used a similar black+gold/yellow+white color scheme on uniforms, marketing, advertisements and its hockey arena, mimicking the opposer’s colors and further adding to the likelihood of confusion of the public.” This, of course, is where the fun begins, as the matter is going to put a 242-year-old mainstay of our country’s defense operations against an organization that met approval to exist on June 22, 2016, chose its name exactly five months later and took to the ice for the first time Oct. 6. In other words, the Army definitely has the Goliath role in this squabble, but an in-depth look at the situation could lead one to believe that the defense provider might not suffer the same fate as the biblical Philistine.

Chief owner Bill Foley graduated from West Point in 1967, with general manager George McPhee telling the Washington Post that his boss admired the Army’s colors and wanted his charges to pay homage to them through their uniforms. That information and a TSN Radio Vancouver tweet that has McPhee revealing “We were going to be the Black Knights (also the name of Army’s athletic teams), but we already had the Blackhawks in the league, so the league was trying to get us to come up with another name, so another name used at West Point is the Golden Knights for the parachute team” will enable the entity to argue that the Golden Knights have shown a tad too much valor in crafting their marketing existence. The Army acted Wednesday after having initially expressed opposition in September, with The College of Saint Rose also looking for legal intervention, as it holds the trademark for “Golden Knights.”

Though the learning institution will have another two months to formulate a more elaborate rejection of Black Knights Sports Entertainment’s registration, which the patent office refused in August, its more high-profile ally in brandishing bravery against the upstarts did not delay and wants to eliminate any possibility for the public to confuse the parachute team with the hockey club.

The Golden Knights gave what some might dub a snarky reaction to the allegations, stating that they are “not aware of a single complaint from anyone attending our games that they were expecting to see the parachute team and not a professional hockey game.” The franchise also noted it will not offer further comments on the ordeal, but it does not need to do so for this matter to intensify. The speculation alone will inspire more than a few keystrokes in the coming weeks, with the Golden Knights having until February 19 to answer the notice. Considering that the Army holds no trademarks for the “Golden Knights” yet values the appellation nonetheless, as well as the hockey franchise’s in-limbo trademark approval saga, one could say that the Golden Knights’ desire to retain the Pacific Division lead might not register as Foley and McPhee’s top priority.

Though the parties could settle the dispute at any point, the filing has everything tentatively taking just over 18 months to have them reach a request for an oral hearing. As NHL deputy commissioner Bill Daly has said his employer has no intention “to reconsider the name or logo of this franchise” and since the Army backs down to nobody, this could prove a contest of might against might. With respect to everything, might it be more reasonable to bet on black, gold, red and steel gray—the Golden Knights’ colors—or the black and gold of the Army? The battle lines have definitely been drawn.